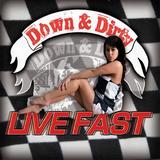 Review:
Chicago, Illinois bred Down & Dirty look like the younger brothers of sleaze rock outfit Dirty Penny and even scored an opening slot with them and Vains Of Jenna. With these connections I figured that I would like the music on Down & Dirty‘s debut disc Live Fast, and for the most part I figured right.

You wouldn’t know it from the insipid wishy-washy stuff that gets played on mainstream radio today, but with what has come out in the last few years it’s proving to be a good time for rock fans. It’s especially reassuring when you get a group of young guys like Down & Dirty (who are only around 16 and 17 years old) flying the flag for rock instead of carrying the torch for boy-band pop.

Things get started with “Tear It Up” which is a lively and bouncy number. With “O’ Yeah”, as you can probably guess from the title, there isn’t much more than “Oh Yeah”, but it’s so damn catchy who’s bothered about lyrical genius. The pace changes for the ballad “Heartbreaker”, which when it starts off I didn’t think I was going to like it, and at over 6 minutes long this one overstays its welcome by a few minutes. But that quibble aside, it actually builds up into something pretty cool and singer Majyk sounds his best on this track, although he’s a good singer anyway, but he adds a different twist to his vocals when he lets his voice soar in the middle of this number. It also has some lovely female backing vocals. The highlight though for me on Live Fast is the final song “Midnight Train”, which is a gutsy big bang closing.

This is pretty simple stuff, but enjoyable and likeable. A few songs have a demo like sound quality to them, but overall the production is impressive considering these guys are probably still at school and presumably on a fairly limited budget.

Down & Dirty are not heavy metal, this is more rock with a party feel to it, sprinkled with a dash of sleaze. They seem to be in the business of having a good time and that’s what it’s all about for a lot of fans of this genre. There is promise here – from the appealing upbeat music that is at times as feisty and as energetic as Dirty Rhythm, to some fairly good musicianship, they have an enthusiastic air about them.

Live Fast is an above average effort from a band from the next generation. Maybe there is musical hope for today’s youth after all. Down & Dirty are a band to keep your eye on and I for one look forward to watching them evolve and grow.