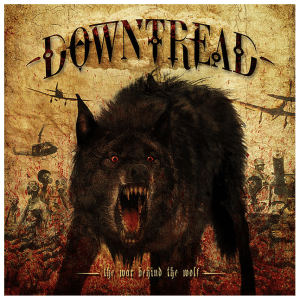 Review:
Minneapolis/St. Paul, Minnesota, USA is home to a few well known artists: Prince, American Head Charge, Soul Asylum, and many others. 2007 saw the birth of another band from the area: Downtread. With the release of their third album The War Behind The Wolf approaching, these men are ready to fill your ears with some heavy, melodic, and some fist pumping metal. Brett Petrusek is the voice behind the band with his clean, raspy and at times growl vocals that goes along great with the blistering music. Not only does he handle the vocal duties, he also shares the lead guitar work with Marc Paradise. The rhythm section consists of Robert Berg on bass and Eric Domagall on drums.

I recently had the privilege of seeing this band live when they opened for Lynch Mob. They played five tracks off this album and they sounded great live (“Perfect Day,” “World Is Breaking,” “Culture of Violence,” “Next Victim,” and “Fall From Grace”). They have a past with George Lynch as he played on two of their tracks (“Without You Now” and “Lovesong”) from one of their previous albums, 144. Domagall was great to watch live behind the kit. He is one of those drummers that you just can’t keep your eyes off of because he is doing so much behind that kit. With all the spinning, flipping, and playing catch with those sticks, he reminded me a lot of Morgan Rose of Sevendust. The rest of the band was on fire that night and I thoroughly enjoyed their show. Can’t wait to see them live again after I am familiar with their songs, because that was the first time I got to experience Downtread.

The War Behind The Wolf is a high adrenaline album that kicks off with “Next Victim.” Opening riff reminds me a lot of Zakk Wylde’s guitar playing. Heavy thick sounding riffs that just kick ass and a guitar solo that shreds to boot! The next nine tracks are filled with the same thing that “Next Victim” put the listener through: hooky riffs, killer solos, and some great rhythm to bang your head too. Some of my favorite songs on this album are: “Culture Of Violence,” “Perfect Day,” “Catatonic State,” and “Buried Not Dead.” Downtread is not creating anything that is new, we have heard most of this before, but they do an amazing job at perfecting the craft.

The War Behind The Wolf is slated for an “official” November 2015 release and will see them out on the road supporting the new album. You will not want to miss their high energy live performance. They will have you begging for more.