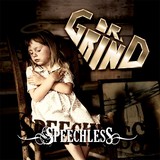 Review:
Dr. Grind was a Seattle-based melodic metal/AOR band formed by drummer Dave McCabe circa 1991/1992 at the end of hair metal’s heyday. The band built a strong local following in the Pacific Northwest and released two self-titled recordings in 1994–a 6-song, cassette-only demo and a 14-song CD. 17 of those 20 studio recordings are included in Speechless, a beautifully packaged reissue CD that was released the same day as Sgt. Roxx‘ acclaimed Weapon Of Miss Distraction by the legendary glam/sleaze reissue label Eonian Records. Speechless clocks in at 79:48, so it is a very long album packed about as tight as possible with music.

Dr. Grind‘s sound is essentially an amalgam of the very best moments of Dokken, XYZ, and Rage For Order-period Queensryche. Speechless starts in a hard rocking stride before diverting into a long stretch of metallic AOR tracks starting with the title track. It then returns to a harder edge on “Gone”, and saves some of the heaviest and most intense moments for the final songs on the disc. All of the tracks from Dr. Grind‘s six-song demo are featured here, but three songs from the original 14-song CD (“Something To Come”, “Truth”, and “Walk That Walk”) are absent, which means you will need to find the original Dr. Grind CD from 1994 if you want to get those tracks.

Circa 1990, there was an emotional, guitar-based metallic AOR sound that groups like Tesla, Great White, and Slaughter were trying to mine but couldn’t quite reach, try as the may. But Dr. Grind truly nailed the sound that those bands were searching for, and unabashedly so. This almost flawless metal/AOR hybrid is the foundation of Dr. Grind‘s sound on Speechless. But as the album rolls along, the sound shifts and changes back and forth like a mood ring as the band forays into other musical influences such as Helloween, Van Halen, Stryper, L.A. Guns, and even (thankfully briefly) Stone Temple Pilots, so the album never gets boring. There is a consistent sense of longing and high-tension emotion that runs throughout the CD, and that heart-aching passion remains consistent the entire time and never lets up. Speechless admittedly doesn’t feature any particularly incinerating songs or memorable potential singles, which makes the music slightly difficult to absorb. It is instead an album that you fall in love with and become familiar with over time to the point that it may end up staying in regular rotation for a long time.

So with music this good, why weren’t Dr. Grind more popular? Very simple–they arrived on the scene waaaay to late. As mentioned, the original release date of the Dr. Grind demo and CD were 1994. Dr. Grind essentially got the recipe right after the public’s gag reflex from too much poorly made metal had already kicked in. I suspect that had the band arrived around in 1987, they probably would have done fine, but 1994 was too little too late for their chosen sound.

The only compliant the author has about Speechless is that the quality of the source material used for the CD was not up to par. The original masters have apparently been lost, and therefore a cassette dub of the demo tracks and an original CD had to be used. Apparently the executive engineer from the original sessions did everything he could to improve their quality for this release, but they still sound like they were dubbed on a cheap cassette player from the period. It does not diminish the high quality of the music, however.

This review was admittedly a little tough to write because, frankly, the album lived up to its name–it truly left the author ‘speechless’. Listening to this CD is like meeting an extremely beautiful woman and being so dumbfounded you can hardly say “Pleased to meet you”–it’s that good. It goes without saying that if you like high quality commercial metal/AOR and moving, emotional music, you will absolutely want to get a copy of Speechless. Thank you Eonian Records for rescuing this music from the jaws of obscurity and making it available once again!