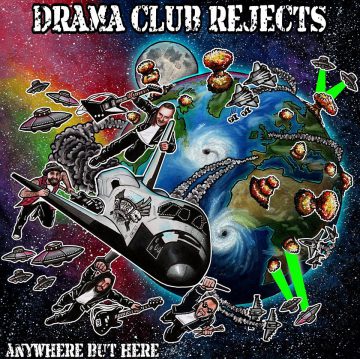 Review:
Drama Club Rejects — for those who aren’t familiar with them — are a four-piece punk, rock and metal band from the north of England. They boast two very familiar members with real pedigrees from the rock world. Nick Parsons handles the vocals and guitar and is formerly of the Almighty and Whatever while Stidi on drums is formally of The Wildhearts and Whatever. The other two members are — the “young guns” of the band — Stesh on guitar and Nash on bass. If you like fast paced rock n’ roll with a punk edge, check them out.

Anywhere But Here is the Drama Club Rejects‘ follow up to the self-titled debut album. It’s only five tracks but what great tracks they are. “Comadiet” sets of at great pace with Stidi doing what he does best, hitting them like a battering ram. “Culture Vulture” is sure to become a live favourite with some fine “Yeah yeah yeahs” that the fans can sing along to. I had the pleasure of watching the Drama Club Rejects play live last year and they have that wonderful mix of fury and melody under one roof.

“Shoulders Of Giants” is an anthemic piece of work with a great chorus, storming guitars and a beautiful fade at the end. “Starseed” has the best guitar solo on the EP and lovely crunchy rhythm. The closer “Too Much” is everything Drama Club Rejects are about great songs, fast flowing music, big chunky riffs. My only criticism is that it’s over too soon.