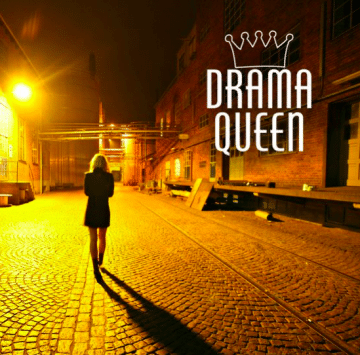 Review:
Hard rockers Drama Queen have done a lot of things right with their recently released self-titled album. The CD package including the booklet is very impressive for a debut album release as it appears that no expense has been spared in that regard. The production on the album is very good as sonically, the record sounds great and really crisp. The group has over 76,000 Facebook likes for its Facebook band account. To put things into perspective in that regard, long-time Canadian veteran hard rockers Killer Dwarfs, who have six studio albums under their belt, have less than 10,000 Facebook likes. Diemonds, who have been at it for about 12 years, tour quite a bit into the States every year, arguably use Facebook as their primary advertising tool and have three albums under their belt have just under 25,000 Facebook likes. Jack Russell’s Great White has just under 64,000 Facebook likes. The high amount of Facebook likes that Drama Queen had back in 2016 (and still to this day) is what caught my attention when I posted my first article about the band on Sleaze Roxx back in mid-2016.

The one thing is you can do everything right in the music business but if your songs aren’t that great, you’re simply not going to make it very far or become a one hit (or two hit) wonder. Drama Queen advertise themselves as having that ’80s sound and with the great guitar tone exhibited by guitarist Matt Vogt (check out “Red Rocker Girl”), they certainly are well on their way to achieving that. Unfortunately, I equate the ’80s to bombastic and catchy choruses, upbeat songs and memorable melodies. Drama Queen miss the mark in that regard as many of their songs start off quite nicely but never pick up to that next level. There are no real scorchers or anthems on the album to speak of. Most songs are mid-tempo at best. Vogt‘s guitar sound is the main highlight of the entire record but his talents are seemingly almost wasted due to the songs themselves. Lead vocalist Tee Sing‘s vocals are alright but do not really grab me. There are some pretty good melodies at times on certain songs such as “Annie” and “Drama Queen” but they don’t infiltrate my mind in any meaningful and lasting way.

I started listening to Drama Queen‘s self-titled album while driving my car and honestly, I couldn’t make it through the entire album. The songs were quite polished with that nice guitar tone from Vogt but for the most part were so slow paced and by the time that the chorus would come, it seemed that the songs had almost regressed, rather than progressed to that next level. I listened to the record a few more times before putting it aside hoping that I might warm up to it a little more later on. As I revisited the album tonight, it sounds a lot better than my initial first few listens but it still feels like something is missing for most of the tracks. There are definitely a lot of ’80s elements on the record with “We’re On Fire” sounding like Ratt, “Drama Queen” reminding me of the Scorpions, the opening bluesy guitar notes reminiscent of Cinderella and the opening guitar riff on “Stop Me From Crying” sounding like Bryan Adams.

Funny enough, as I was scrolling through Drama Queen‘s Facebook home page looking for the release date for the group’s self-titled album, I was surprised by how many seemingly good reviews that the album had received. I didn’t bother reading any of them as I didn’t want to influence my opinion in any way. To me, Drama Queen‘s self-titled album is a record with songs that have a lot of unfinished potential. There are a lot of good elements to the songs and they usually start off pretty nicely but they never seem to get to that next level.