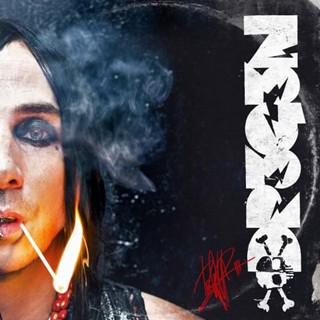 Review:
“Dregen? Who’s that?” were the first words I muttered when fellow Sleaze Roxx writer Mark Hovarth suggested that I check him out. Halfway through my first listen of the simple and catchy “Just Like That”, I knew that I would be purchasing Dregen‘s debut CD as soon as possible.

What I can tell you is that I have only been listening to Dregen‘s self-titled album ever since I got it a few days ago. The songs are simple, quick — with the CD clocking in at less than 35 minutes — yet complex in terms of all the different musical instruments that you can hear throughout. It is tough to describe Dregen‘s sound — it is like a combination of L.A. Guns styled sleaze, Green Day‘s simple chord rock, weird and funky Alice Cooper, and Sex Pistols punk, all rolled into one.

The first two songs off Dregen‘s debut album are the best ones. I could listen to “Divisions Of Me” and “Just Like That” all day long. After those two straight forward rockers, the CD takes a bit of an Alice Cooper or Van Halen turn with some funky slower ecletic tunes like “Flat Tyre On A Muddy Road” and “Gig Pig”. More various, and possible musical, influences can be heard throughout the next few songs. The album picks up again with the catchy “Pink Hearse” with its Offspring like at times vocals. The opening riff on “One Man Army” sounds a lot like a spinoff of Alice Cooper‘s “No More Mr. Nice Guy” and “6:10” could have easily been found on one of the Rolling Stones‘ classic albums. The two songs that I do not like that much are “Bad Situation” and “Refuse”, but Dregen ends on a high with the faster and catchier “Mojo’s Gone”.

Funny enough, one of Dregen‘s latest gigs has been as part of Michael Monroe‘s touring and backing band. However, I find that Dregen is more than ready to assume the spotlight as the lead frontman. I love the sound of Dregen‘s voice and a lot of credit on this project has to go to sidekick Par Wiksten, given that he has songwriting credits on eight of the ten songs and also co-produced the album. Former Hellacopters bandmate Nicke Andersson also has to get an honorable mention for co-writing two of the CD’s best tracks — “Divisions Of Me” and “Mojo’s Gone”.

You would think that having so many different types of instruments on one album would result in a confused sounding musical effort, but that is what actually makes Dregen‘s debut brilliant and sets it apart from other albums. Although I first heard Dregen‘s CD in early 2014, I think that it has just made my top 10 list of 2013!