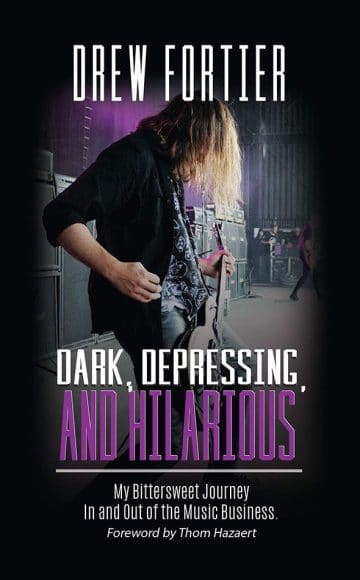 Review:
I know. Who the hell is Drew Fortier? How does a musician that you may have never ever heard of write a book? Drew Fortier actually has an amazing story as someone who really wasn’t in the music business and made the most of his opportunities in the span of a few years to amazingly have enough experiences in the music industry to be able to write a book. Albeit, it’s a rather short book with some very large print but nevertheless, it’s a book. If guitarist Stacey Blades can write an autobiography about his time mid-way in L.A. Guns (which was titled Snake Eyes: Confessions of a Replacement Rockstar, came out in 2009 and turned out to be pretty entertaining), then Fortier can sure as hell write a book considering his music experiences in the span of about five years. Creating, filming, editing and releasing a documentary (Attack Of Life: The Bang Tango Movie) about a legitimate band from back in the ’80s — check. Playing in Bang Tango on and off for a couple of years including performances at the M3 Rock Festival and Rocklahoma — check. Becoming EMP Label Group principal Thom Hazaert‘s right hand man — check.

I must confess that prior to taking over as Sleaze Roxx editor in June 2015, I was a bit of a hard rock / heavy metal autobiography junkie having read just about every book that had been put out by musicians in my favorite ’80s heavy metal bands. Since June 2015, I haven’t had time to read any rock autobiographies and if it wasn’t for the large print in Fortier‘s autobiography Dark, Depressing, and Hilarious: My Bittersweet Journey In and Out of the Music Business, I probably wouldn’t have bothered reading it or at least finishing it.

Fortier‘s autobiography is easy to read but at the same time frustrating as well. Fortier seems to have mastered the art of hit and run with his book given that he is adept at providing stories and really entire chapters of his music experiences in a few pages. There are ten chapters and 63 sub-chapters in a book that only has 154 pages and as previously mentioned, very big print. Fortier is very good at providing you highlights and keeping you interested by moving quickly from one subject to another. The problem is that Fortier rarely goes in depth on anything.

The worst part details wise (spoiler alert) is when Fortier gets essentially screwed over by Bang Tango frontman Joe Leste in some sort of business deal for which Fortier had to stick his neck out for. Fortier mentions the event but provides pretty much zero details on how he got screwed over by Leste. That is frustrating. Isn’t an autobiography supposed to be a tell all type thing where you finally get the juicy details of what may occurred. Clearly, that is not the case for Fortier as he remains quite protective about any real details during his time in Bang Tango, which happens to be the most intriguing part of his autobiography. I think it’s because he remains an unofficial member of the band so he didn’t want to completely annihilate his relationship with the band members. Aside from some stories about Leste and praising guitarist Rowan Robertson, Fortier remains relatively mum on his time in Bang Tango and the two band members — bassist Lance Eric and drummer Tim Russell.

I simply wished that Fortier would have gone more in depth on certain interesting topics because he does have quite a few dark, depressing and sometimes hilarious stories to share. Another example of a missed opportunity for more details is when he describes former Faith No More and unfortunately now deceased frontman Chuck Morley‘s accommodations and transportation for a solo tour. Wow, that was depressing. But what about Fortier‘s own travels with Bang Tango? Not many details on that front….

Overall, Fortier provides a hit and run type book with lots of little story snippets where he moves quickly from one topic to the next. There is a nice flow to the book despite him doing that. While I would have liked Fortier to have gone more in depth on certain interesting stories, his autobiography is the first one that I have started in over three years that I have actually finished. That says something right there — that and the very large print!