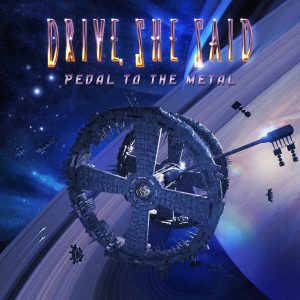 PEDAL TO THE METAL
Released on April 15, 2016 (Frontiers Music Srl)

Review:
Founded in 1986, Drive, She Said released its self-titled debut in ’89, featuring the performances and writing skills of Bruce Kulick (KISS) and Canadian rocker Aldo Nova respectively. Although generally not considered successful in North America, Drive, She Said released a further two albums — Drivin’ Wheel and Excelerator – to great acclaim in Europe during the 1990s. Drive. She Said were eventually picked up by Frontiers Records, and issued Real Life in 2003. Now they’re back with a new offering, Pedal To The Metal.

If you’re into keyboard driven melodic hard rock, you will love this album. A little softer then I would like, it still elicits visions of Europe, or Denim Devils era Bonafide, except with the addition of keys. It is interesting that keyboard player Mark Mangold lists working with Michael Bolton as one of his past performance accomplishments. I can certainly hear that in ballads such as “Said It All” and “In Your Arms” from the musical composition down to the tone of the synths. “All I Wanna Do” is your classic acoustic soft song.

Lead off track “Touch” is a hard driver, and the title track “Pedal To The Metal” is classic ’80s.  Think a teen movie from that era with Tom Cruise driving down a sunny highway in a Camaro convertible. It even has an epic sing along chorus. “In R Blood” is mostly uninteresting, but redeems itself in the chorus, again with a catchy hook. “Love Will Win In the End” is notable for its Whitesnake rhythm guitar lines, and “Lost In You” stomps along. “Writing On The Wall” is clearly Deep Purple style with Jon Lord‘s Hammond organ work in the solo. It’s pretty good. Drive. She Said seem to experiment a little with “Im the Nyte” bringing out an industrial/techno/dance groove that I think works for the most part.

I keep coming back to the songs’ choruses. They have catchy lines with memorable hooks. I didn’t know much about Drive, She Said before popping in Pedal To The Metal, but this band reminds me quite a bit of Treat’s Ghosts Of Graceland.  Same style of melodic hard rock. If you’re into that, Drive She Said‘s Pedal To The Metal is worth a listen.