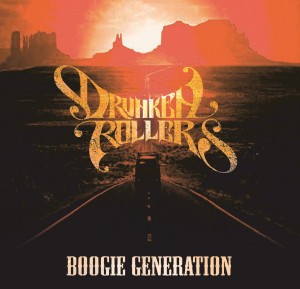 Review:
Sleaze Roxx seems to have covered an inordinate number of Italian based bands lately, including Hell In The Club, 17 Crash, Twisted and Hangarvain, and I could go on. I don’t know if it’s because of the quality product available from that region, or the lack of releases from other countries in this genre. Be that as it may, Drunken Rollers are a four piece from Italy serving up some interesting tracks on their album Boogie Generation.

I do have to ask why bands offer an “intro” track that is simply a drumbeat with a singular guitar riff lasting a mere 30 seconds, as track #1. Since there are only 11 songs on the album, I can only assume it’s to pad the track count. Just a little pet peeve of mine. “Start All Over Again” and “I’m Gone” are very much an homage to Thin Lizzy sounding guitars. I wish I had my old cassettes because I know those riffs from somewhere. Listening to “Drivers Licence” and “Whiskey & Gasoline” brings me back to those heady days when the Four Horsemen were riding high. The title track “Boogie Generation” has some hard driving guitar work but the chorus gets a little repetitive with the word “Boogie” too many times. It is not a bad song but not one of my favourites either.

Braus continued stating, “The deepest song of the album for me is “Climb The Mountain.” It’s motivational for hard times — times when you think everything’s going down.” I can definitely get that. “Climb The Mountain” brings to mind Canadian band Monster Truck with powerful, aggressive guitars and pounding beat. Finally, I was clearly expecting “Roll On Down The Highway” to be another Bachman Turner Overdrive cover, but instead was pleasantly surprised with an original great driving song.

Boogie Generation is not quite the throwback sound the band quotes in its publicity — Allman Bros to ZZ Top. While listening to the album, I heard some traces of Thin Lizzy, the Black Crowes, Pink Floyd and Four Horsemen. Boogie Generation is certainly based in classic rock, but also a modern, well done hard rock album. All that to say it was an interesting listen or ten.  Check it out on Soundcloud.

Special thanks to Lorenzo Braus for his thoughts.