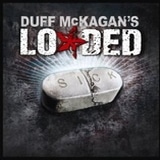 Review:
There’s no doubt that if you’ve heard Duff McKagan‘s solo work or his work with The Neurotic Outsiders and the Guns N’ Roses punk covers where he handles the vocals that the man can sing. He’s far from a David Coverdale or a Glenn Hughes, but he can carry a tune and his punk rock vocal influence lends itself nicely to the new project Loaded.

Signed to Century Media, Loaded became a priority project for Duff while Velvet Revolver was on hiatus. In most cases a side project like Loaded comes off as forced and rushed, the majority of the energy going to the full-time gig. Such is not the case with Sick.

While not a classic, Loaded‘s gritty, sleazy, melodic indie rock is just what the doctor ordered if you’re tired of the same old metal-core or death-core bands that are all the rage. Some of the standouts on Sick are “Flatline”, a punk and rock hybrid that hits the spot, “No Shame”, which screams radio hit, and the infectious “Sleaze Factory” and “Blind Date Girl”.

In short, Sick is more stimulating than an album issued by a certain lunatic who has single handedly killed one of the greatest bands in the history of rock ‘n roll. I’ll let you figure out who I am talking about!