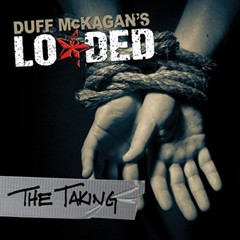 Review:
Duff McKagan is Generation X’s equivalent to the Rolling Stone‘s Keith Richards or Aerosmith‘s Joe Perry — he has lived the fast life and survived to tell about it. Not only that, but the guy has been in two huge bands back to back with Guns N’ Roses and super-group Velvet Revolver with former G N’R bandmates Slash and Matt Sorum. Through the years Duff has been busy — he released solo albums, has been a part of Seattle’s 10 Minute Warning, recorded with Sorum, Duran Duran‘s John Taylor and Sex Pistols guitarist Steve Jones in the Neurotic Outsiders and most recently collaborated with the reunited Jane’s Addiction who he wrote an album with before leaving due to creative differences.

As mentioned, when Duff McKagan isn’t writing, recording and touring with Velvet Revolver he’s keeping busy with some of his other projects. Loaded is a band that he founded years ago, even predating Velvet Revolver, and eventually signed a recording contract with independent metal label Century Media which resulted in an EP and the full-length Sick. Despite receiving critical acclaim by hard rock fans and journalists alike in 2009, Sick didn’t receive proper promotion and it disappeared as quickly as it surfaced.

On their latest offering The Taking, and on a new record label, Duff McKagan’s Loaded have unleashed the same reckless rock ‘n’ roll attitude as before. At this point in his career McKagan has nothing left to prove and has the artistic freedom to do what he feels — despite that The Taking has the intensity and urgency of a scrappy green band that is able and willing to fight their way to the top. The album is set up splendidly with the one-two punch of the abrasive “Lords Of Abaddon” and “Executioner’s Song”. Unlike Sick, The Taking is a darker and moodier album as evidenced by the first single “Dead Skin” and “Follow Me To Hell”. Interestingly enough and slightly out of place, McKagan included the uplifting and catchy “We Win” to the album, which was used as the battle cry for the Seattle Seahawks in the 2010 NFL season — also out of place on The Taking, given the mood and theme of the album, is “Kings Of The World”.

In short, The Taking is two tracks too long in length — other than that it is jam packed with unadulterated punk rock and no-frills rock ‘n’ roll. The Taking is a solid effort, but it doesn’t edge out its predecessor Sick.