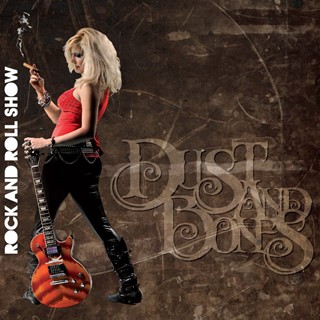 Production:
Produced by Dust And Bones and Shain Lloyd.

Review:
“Got a kick ass hard rock band! That’s Dust And Bones, baby,” belts singer Nick Elmor during “Bleed Rock And Roll”, one of my favorite’s off the Rock And Roll Show album that’s had permanent residence in my truck CD player for the past three months. “Bleed Rock And Roll” epitomizes my life growing up (and I’m sure a good number of you that will take the time to read this), listening to records, watching Headbangers Ball on Saturday nights, and drinking Stroh’s by the vat (we always partook in the 30 pack, not the 18 however).

Rock And Roll Show is Dust And Bones‘ sophomore release, following 2008’s Voodoo, and it shines like a mother. The Illinois band is just the right blend of sleaze and hard rock to appease any fan of bands like Every Mother’s Nightmare, Cats In Boots, Spread Eagle, Kix and the like. There are hard rockers — “Alice’s Wonderland”, “Better Off Without Me”, “Life Of The Party” — and then there are some down and dirty, hide your sister and control your mother, numbers dripping with sex and snarky attitude — “Tongue And Cheek”, “Hypnotize” and “Tulips”.

This album smokes from start to finish. Every cut is a true rock ‘n’ roll anthem meant for arena play, but I would love to catch Dust And Bones at my local watering hole — which I’m sure, from what I’m hearing on this disc, would blow the roof off the joint! The band is tighter than tight, the musicianship is just awesome, and damn if the harmonica playing doesn’t make John Popper jealous. The members of Dust And Bones are perfect players for the genre, and I really get off on the one guitar play — leads with no rhythm guitar overdubs are so cool and just downright greasy!

Rock And Roll Show is a kick-ass record by an equally kick-ass band. Go get this album, crank it up to eleven, crack open a sixer or more with the buddies, tap those feet and dance about ‘shakin’ that thang’ to the delicious wall of groove-injected sleaze-infected hard rock that Dust And Bones so proudly and skillfully jams down the collective gullets of the masses for their pure and utter enjoyment.