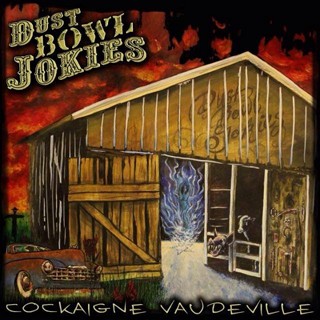 Review:
I have no clue what ‘jokie’ means or even what the word ‘cockaigne’ represents, but after listening to this album I’m going to assume they are euphemisms for ‘kick-ass rock ‘n’ roll’. With the European re-release of their debut album, including a couple bonus tracks, the Dust Bowl Jokies more than prove that the Swedish sleaze revival is nowhere near running out of steam.

While comparisons to Hardcore Superstar are unavoidable, what I really like about the Dust Bowl Jokies is how they mix things up on Cockaigne Vaudeville. “Down To The Bone”, “Living In The Cellar” and the single “Boots On Rocks Off” will satisfy any sleaze fan’s appetite as they barrel ahead with a swagger few groups can muster. They are sleazy numbers through and through, yet there is an underlying funkiness (for lack of a better word) to each of them that gets your body moving while your head is banging in approval. I’m not sure why, but I can’t help but feel this is how Aerosmith‘s Joe Perry and Brad Whitford would sound if the legendary guitar duo were born forty years later.

Even when the Dust Bowl Jokies break from the norm, as shown on the spaghetti western “Whore Of Babylon” and the slide guitar driven “Vulture Culture”, it seems to work — almost like an intermission before the album revs up once again. “Hoodoo Voodoo Allstar” gets the second half of the album rolling along but it is “The Wicked” that stands out. The song has a swamp-boogie vibe throughout and once again displays that the Dust Bowl Jokies are willing to push not only their sound but boundaries within the sleaze genre itself. Closing out this incredible debut is “Blood, Sweat And Perfume”, which understandably ends the festivities on another hard rocking note.

Cockaigne Vaudeville really is a great album that expands upon the sleaze resurrection that has been brewing in Sweden for the last decade. Great guitar work, trashy vocals, a cocksure attitude and eleven songs with a varied delivery make the Dust Bowl Jokies a group worth keeping your eye on in the future!