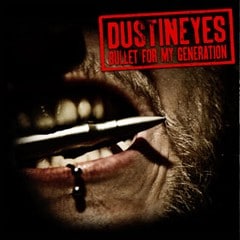 Review:
I like listening to albums by bands I’ve never heard of. No preconceptions and no expectations, just an album to enjoy… or not. The first run through of this long player from Italian band Dustineyes is an inconclusive affair. It neither had me diving for the ‘off’ button or scrambling to turn it up like a man with pants made of wasps.

It takes a good few listens of Bullet For My Generation to draw any conclusions, more than usual, as this really is a difficult album to fathom. The short intro track is great, it really grabs your attention in an almost Ennio Morricone sort of way, and then the first song kicks off proper and we are firmly in Hardcore Superstar covering Motorhead territory. The main offender in the ‘Motorhead sound-alike’ stakes is the song “This Is My Ring”, which thunders along with chief screamer Emanuele Morra sounding like Lemmy with a chest infection. And herein lies the problem, singing like this is ok to listen to for two, maybe three tracks (unless you happen to be listening to Mr. Kilminster), but here it’s just grating. The vocals sound strained, painfully so at times — some melody or range wouldn’t go amiss either actually. It’s this lack of variation that puts me in mind of Dustineyes being Social Distortion‘s heavy metal cousins.

Musically Dustineyes kick massive amounts of gluteus maximus with Marshalls set to 11, wah wah pedal a-go-go a la Slash, some terrific drumming, and really seismic registering stuff. The whole thing reminds me of Sister Sin, only without the hooks… or the boobs.

Dustineyes certainly look the part and they are gigging in the right circles, being guests to Hardcore Superstar amongst others, so they must be doing something right. But it’s difficult to see where these guys can go next if they stick with this formula. There are so many other bands doing it better and even they are struggling against the tide of apathy that is today’s music business.

Bullet For My Generation isn’t going to win a Grammy, or even the Italian version of one, and in all honesty it would be hard pressed to win an award for best album by a band from Varese — but don’t let this put you off. There are a couple of definite standout numbers, either of which would be single material if anyone released or bought singles anymore. “Sick Of You” and “Wild ‘N’ Alone” stand as proof positive that Dustineyes can write songs with a hook, a melody and a hummable chorus — but two good tracks out of eleven isn’t enough to salvage this album from the ‘difficult to sit through again’ pile.