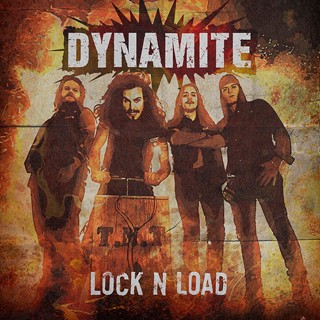 Review:
Bon Scott is resurrected! If I didn’t know any better that’s exactly what I’d be thinking when listening to Dynamite‘s debut CD Lock N Load. Lead vocalist (and guitarist) Mattis Karlsson sounds A LOT like Scott — to the point that if someone had initially told me that this was a long lost album from AC/DC‘s classic era I would have believed them. I would also have thought that AC/DC had picked it up a notch in terms of delivering faster rocking tunes one after the other, because Lock N Load is far more energetic than their recent releases.

There is no doubt that early AC/DC comparisons are inevitable for Dynamite and Lock N Load. However, to simply call the Swedish rocker’s debut an early AC/DC copycat would be unfair, because Dynamite deliver a faster paced version of the infamous Australian’s three-chord riffs, and of course lead vocals and growls. If you like one song off Lock N Load, odds are that you will enjoy all of them since the entire album has a similar pace and sound — aside from the one slower track “Streetfighting Blues”. While the songs are arguably fairly undistinguishable, my favorites include the album opener “Bullseye”, the hard-hitting “Work Hard For The Money”, the single “Lock N’ Load”, and the furious album (and likely show) closer “Dynamite” with its awesome solo.

Dynamite offers nothing really original, but if you like old school Bon Scott era AC/DC the band quite simply offers you a can’t miss proposition with Lock N Load. For those of you that can’t get enough of this type of music, Dynamite are ready to release their second platter of straight-ahead rock in a couple months — not bad for a band who have only been existence since 2012.