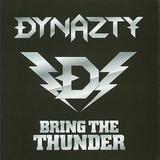 Review:
Dynazty is yet another up and coming band bursting out of Sweden. They could be called somewhat of an ‘all-star band’ as it is mainly a joint venture of two former bands, Sharp and Foxey. These guys have only been around for about a year and are already releasing their debut, appropriately titled Bring The Thunder. Outta Sweden the world got to hear quite a few ‘modern sleaze’ classics in recent years such as Crashdiet‘s Rest In Sleaze, Crazy Lixx‘s Loud Minority and Gemini Five‘s Sex, Drugs & Anarchy, and therefore one is compelled to compare Bring The Thunder to the aforementioned albums.

Sound wise Dynazty would be positioned somewhere in between Crashdiet and Crazy Lixx, melding the heaviness of Slave To The Grind era Skid Row with huge choruses from Whitesnake or Bon Jovi. While I think the title-track and opener lacks a certain something, what follows next is simply amazing. “Catch The Night” is an 80’s rocker with just the right amount of sleaze to potentially put it in every Sleaze Roxx reader’s year end list. “Lights Out (In Candyland)” continues in the same vein before the ballad “Far Away”, shows that Dynazty also know how to write an impressive little epic. After that song guitarists Rob Love and John Berg get lots of opportunities to shred away, literally pulling riffs out of their sleeves. Highlights in the second half of the disc for me are the brilliant “Adrenaline” and the moody “Take Me Down”, but I could have done without “Higher N’ Higher” and the bonus track “Sail Away”.

So the question is, is Dynazty up there with Crashdiet or Crazy Lixx? The answer is probably not ‘no’, but ‘not yet’! The musical talent of these five guys is striking, there are glimpses of magic in their song-writing skills and to me it is only a matter of time until they deliver a classic album as well. Until then, Bring The Thunder is certainly a very enjoyable affair, pushed a step further by the as usual huge production courtesy of Chris Laney. This man is only involved in strong albums, so you can’t go wrong if you like any of the aforementioned bands. Support Dynazty and ‘get the thunder’!