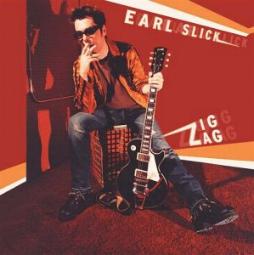 Review:
Earl Slick, most remembered for his work with David Bowie, has returned with a new semi-instrumental album named Zig Zag. Fans of this website will likely remember Slick most for his work with the cult favorites Little Caesar — but be forewarned, Zig Zag is far more eclectic than anything Little Caesar attempted, and may be too far removed from hard rock for some of the people reading this review. With that being said, I have only owned two semi-instrumental albums in my life, and both have been Earl Slick releases — so that should say something!

Zig Zag starts off with “Dancing With Eleanor”, an up-tempo number that would feel at home on a Joe Satriani release. “Zig Zag” is a laid-back song, but one which grabs you and pulls you in with its South American beats and rhythms. “Crunched” is my personal favorite — vocalist Summer Rose has an exceptional Sass Jordan type growl, as Slick wraps his guitar around her every word. Def Leppard‘s Joe Elliot does the lead vocal work on “Psycho Twang”, which is the most rocking tune on Zig Zag — its catchy chorus is tailor made for current rock radio.

I find some of the vocal deliveries to be too Euro-pop for my tastes (I never was a David Bowie fan — and would far sooner have had Ron Young return), but at least Slick‘s unrelenting guitar remains a constant. Rock fans will definitely need an open mind to enjoy Zig Zag, as no two songs are even remotely alike. More information can be found on Earl Slick‘s official website.