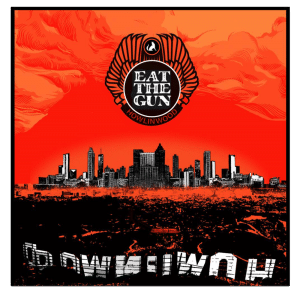 Review:
Writing for Sleaze Roxx is truly a blast. Though I’m mainly known as a musician and performer, I am an avid reader and have plans to someday write novels, so it’s fun to be able to stretch the writing muscles and do something else I truly enjoy and love. When asked to contribute reviews and interviews for Sleaze Roxx again, I was honoured because I’m a big fan of the site: it is one of the best rock n roll news sites out there, and I’m honoured to give them a few contributions here and there.

Because I am a contributor to this site, I’ve started getting emails in my inbox of different albums to check out for potential review. It’s fun being able to check out tons of new music from bands I’ve never heard of. A lot of it may appeal to my personal eclectic tastes but not to the tastes of the Sleaze Roxx readers (I’m getting A LOT of death metal in my inbox), but every now and then, I get a band that may have slipped past my radar that I’m glad I’ve uncovered. Eat the Gun is such a band.

Eat the Gun are a German power-trio, and the best way to describe their sound is “rock n roll”. It’s straight-forward, kick-ass, catchy rock n roll. I’d compare them best to Danko Jones and Calabrese; they have a very straight-forward sound without too many frills or weird stylisitc shifts, and that’s what makes this band so great. Eat the Gun are a rock band who wants to rock, and they don’t pretend to be anything else.

Eat the Gun‘s early work has a bit more of an ’80s party edge, similar to Kissin Dynamite, but the band moved to a more alt-rock, Danko Jones style on their 2013 album Stripped To The Bone. The band’s fifth album, Howlinwood, continues the sonic stylings of their previous release. The songs may not be as explicity party-friendly, and the lyrics may be a little bit more serious, but the songs are still badass enough to make you want to pump your fist in the air and rock out. The album has a couple of ballads (which have a very modern and commercial sound – think the kind of stuff you may have heard on Paul Stanley‘s Live To Win, but replace the string sections with synthesizers), but for the most part, it’s a kickass rock record by a kickass band.

If you like Danko Jones or Calabrese, you’ll like this album and you should get it: end of story. This album is officially Lipstick Approved.

Reviewed by Greg Troyan of Lipstick for Sleaze Roxx, August 2015