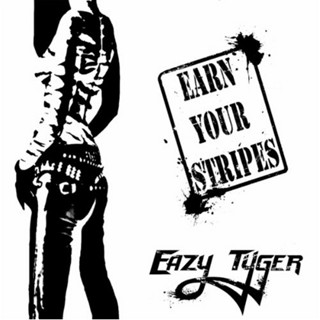 Review:
Dublin, Ireland isn’t what I would consider a hotbed of hard rock activity, but Eazy Tyger has hit the scene to prove us all wrong. While The Answer, and to a lesser extent Trucker Diablo, may be opening doors for fellow countrymen with dreams of making a musical splash, Eazy Tyger have little in common with them, instead sounding as if they were born and bred on the Sunset Strip.

What sets these young upstarts apart from the majority of hard rock bands is singer Neill Marshall, whose voice has a dreamy quality about it. He doesn’t overpower you with his throat, yet he doesn’t come across as a wimp either — occasionally sounding something like L.A. Guns‘ Phil Lewis. Whereas L.A. Guns kicked down doors with their sleazy attitude, Eazy Tyger are far more generic, safe and paint-by-numbers.

Two different approaches seem to drive the Eazy Tyger sound — the aforementioned sleaze of L.A. Guns and the pop-metal sound of forgotten third-rate glam bands like Flame. On the pop-metal side is the surprisingly infectious title track, the appropriately titled “’83”, “Switchblade” and the straight-forward “Two Story Town” — on the sleazier end of things is the opener “B.O.N.E.”, “Head Over Heels”, “Round & Round”, which could easily have been an L.A. Guns B-side, and the guitar-driven “Nitelife”.

Despite some good guitar work, and enjoyable vocals, I can’t get past the fact that I’ve heard this all before… and done better (although also a lot worse). Its one thing to recapture the sounds of a bygone era, but it is another to harness its energy and excitement — Eazy Tyger have done the former, but come up short in the latter. I’m not sure if I should be annoyed with this band for coming across as copycats of the earlier copycats, or praise them for delivering exactly what one would expect from a release such as this. If you’re interested in some mindless, catchy fun, you could do a lot worse than Eazy Tyger.