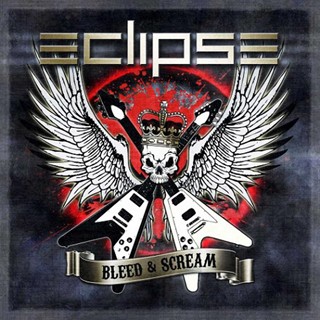 Review:
Swedish melodic rock band Eclipse return with their fourth album and it’s clear that they’ve found their sound before going for it full throttle. The songs on Bleed & Scream have a tendency to become a little similar, but are recorded and performed at such a high standard that Eclipse often get away with it.

“Wake Me Up” stamps the AOR sign all over this album with its uplifting vocals singing out over heavily layered guitars and bursts of backing vocals. “Ain’t Dead Yet” is even catchier — a headlong rush of steadily climbing riffs and melodies. Erik Martensson‘s voice sometimes sounds a little thin, especially in the higher register, but the tone lends itself well to this genre while the guitar solos are often rather long-winded and not that exciting during some of the tracks. Having said that, “A Bitter Taste” is one of the stand-out songs on Bleed & Scream, as is “S.O.S.” — the pair are strong and powerful, both in terms of Martensson‘s voice but also in songwriting. There are some great harmonies during “The Unspoken Heroes”, and “About To Break” shows the slightly mellower side of this boisterous band and the more restrained approach really works well I think. The closing track “After The End Of The World” is too long but brings the album to a hearty close… just stop those damn scales in the solo.

The solid roots Eclipse has laid down in the melodic genre are admirable, but I feel they could still push for some catchier songwriting. Is it wrong of me to say that Bleed & Scream reminds me of Star Trek in places — just a little bit obsessed with supersonic sounding guitars and special effects? Despite this, Eclipse is a competent band with a lusty set of songs — though they are just another melodic rock band.