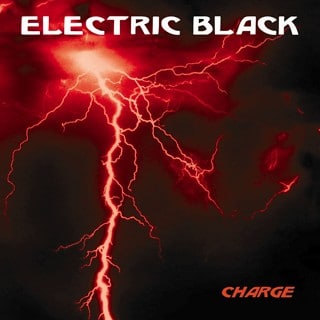 Review:
Many Sleaze Roxx readers will know Kim Hogberg as Wolfchild‘s former frontman, who played on the band’s self-titled debut full-length back in 2006. After leaving Wolfchild to follow his own vision more than seven years ago, Hogberg is finally back with a five-song EP called Charge under the moniker Electric Black. I say under the moniker because for all intent and purposes, Charge is really a solo album from Hogberg — since he is the only current member of the band and plays everything on the EP except drums.

Charge has been a long time coming in my book. I credit Wolfchild for resurrecting my dormant love for new heavy metal music after more than a decade of metal doldrums listening to the same bands over and over due to that mostly awful grunge era. Back in 2006, I stumbled onto a website called Sleaze Roxx and noticed lots of new hard rock bands featured on the site. The first that I heard that compelled me to purchase their music was Wolfchild, and their debut ended up living true to its moniker of “real rock is not dead” while becoming one of my all-time favorite records. You can imagine my disappointment when I heard that Hogberg — who definitely has a love it or hate it voice, due in part to his Finnish laced accent — left Wolfchild about six months after that album’s release. To add to my disappointment, the group — who had by then recruited a new lead vocalist — quickly folded when its leader and bassist Jaska Koivusilta suddenly passed away in early April 2007.

I had always wished for a sequel to Wolfchild‘s amazing debut, and although that will most likely never happen, having Hogberg release new material is the next best thing since he was one of the band’s main songwriters and his distinctive voice made him a very big part of the Wolfchild sound.

Charge kicks off with “Unlucky Star”, which starts with a slow guitar riff that strongly reminds me of the intro to Bryan Adams‘ “Run To You” before the song launches into an upbeat rocker. Straight away, the music on this EP is more upbeat than on Wolfchild — but still rocks. The songs have a bit of an old school ’70s feel to them, for instance the guitar intro to “Open Road” reminds me of early Triumph. “Black Rain” probably has the heaviest opening riff before slowing down to some very familiar sounds — if Wolfchild‘s debut had to have one more song, “Black Rain” would have fit in perfectly. “Undead Band” is the most upbeat rocker on Charge and has Hogberg playing a killer and memorable, but also melodic, guitar solo. I have never been a big fan of ballads but I really enjoy the closer “Wind Cried Your Name” — and a little more each time I hear it.

All of the tracks on Charge are good ones, but I readily concede that if you do not like Hogberg‘s voice you will most likely not enjoy this EP. However, I have always loved his delivery and find that no one sounds quite like him — he does not have the range that some other more accomplished vocalists may have, but his voice dominates the songs and gives them that distinctive edge.

If you liked Wolfchild‘s debut record from eight years ago, picking up Electric Black‘s Charge is a no brainer — and if you appreciate old school rock with a melodic feel, you will probably enjoy this EP. All I know is that I will be listening to Charge on a regular basis for many years to come and hope to hear more material from Hogberg much sooner than another eight years from now.