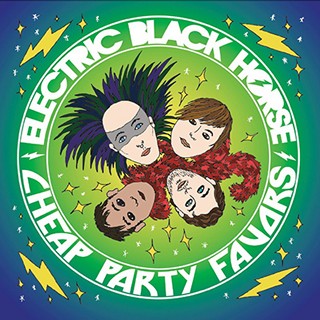 Review:
All aboard the glam train — New York City’s Electric Black Horse have just released what they consider their true debut album, Cheap Party Favors. A couple of years ago the band released a self-titled debut, which has since been considered more of a demo, and three of those songs are carried over and join four new tunes making Cheap Party Favors, a quickie blast of rock and roll.

Electric Black Horse have said KISS is an influence and they aren’t shy in showing it on the opening track “Stone Foxx”, a straight up KISS rhythm guitar song that hits heavy and still keeps it sexy. “Champagne On Ice” follows and is described by lead singer/guitarist Michael Pate as a song “that just comes on like a pack of wild strippers” — enough said. The album’s first single “Boys and Girls” is a catchy and poppy type that makes you want to chew bubble gum and drink whiskey.

“Birthday Bitch” and “Cheap Party Favors” are two carryovers from the band’s original release — “Birthday Bitch” is either a warning or a fuck you to someone in the past while “Cheap Party Favors” offers another warning, this one for those heading out west to chase Hollywood type dreams and then presumably being swallowed up into the world of porn. The band slows it down a little for “Uptown Saturday Night” before killing it with “Koke Rock”, my favorite song by Electric Black Horse that captures what they do well — mix ’70s and glam with a twist of punk. Given the inclusion of songs from the initial demo album I was surprised one of my other favorites, “Roses”, was not included, but I’ve accepted that it didn’t make the cut and have moved on.

Electric Black Horse‘s new release Cheap Party Favors keeps it dirty without melting off your face. At twenty-five minutes flat, Cheap Party Favors provides a blast of glam rock perfect for early mornings, late nights, and everything in between.