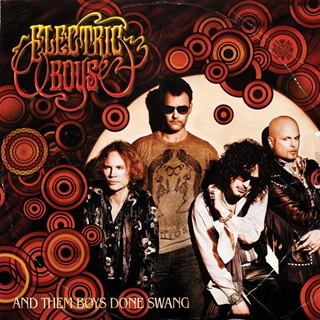 Review:
Hard rock is alive — if anyone has any doubts just look around. Not only are seasoned veterans like Ratt, Warrant, Motley Crue and bunch of others are releasing new music, but we have a lot of brand new young acts who are not afraid to fly the hard rock banner. The motherland of a lot of great young acts appears to be chilly and cold Scandinavia in northern Europe. Bands like CrashDiet, Crazy Lixx and Vains Of Jenna have made names for themselves worldwide and created their own local sleaze rock scene in their homeland. Countries like Sweden, Norway and Denmark have a long tradition of releasing great bands, ones able to craft some anthemic hard rock. Back in the day acts like Hanoi Rocks, Europe, Shotgun Messiah, and Nasty Idols went head to head with the US heavy weights, both sales-wise, and on the ground of songwriting.

One of the lesser known bands that started around the same time, and even managed to gain some minor success, was a contraption called Electric Boys. Led by then teenage wonder Conny Bloom, the band delivered one of the most original sounds at that time, mixing Van Halen reminiscent hard rock with funk and oriental influences. But like many other acts of their time Electric Boys got hit hard in the mid ’90s, with both sales and label interest diminishing, and eventually disbanded. All members remained active musically, with lead man Bloom releasing a couple of solo albums and joining Hanoi Rocks for some time.

In 2011, pretty much out of nowhere, the original band came back — and what a comeback we have. And Them Boys Done Swang is one of those return albums that might easily be a ‘best of’ compilation, if any of these songs were on previous releases. But this is all new material, and it is so professionally enjoyable that one might think these guys were together all the time they were missing. The musicianship here is top notch, with all players giving their best. The sound is modernized, but remains intact with their hard rock roots, with the signature funk/swing taste the band delivered throughout earlier releases. Some songs are more rock, like “A Mother Of A Love Story” and the ultra catchy “Angel In An Armoured Suit”, and others are more swinging like “Welcome To The Hightimes” and the fabulous “Sometimes U Gotta Go Look For The Car”. Songs like “Put Your Arms Around Me” and “Rollin’ Down The Road” could be among the repertoire of late James Brown himself, if he wouldn’t mind a guitar solo once in a while.

The lyrics here are spaced and totally out of this world (who the hell is Father Popcorn, and what does he have to do with magic oysters?) but they are not cheesy at all, which is a strong point — there are no ‘Baby, I love you’s’ here. Even the sole ballad “Ten Thousand Times Goodbye” is a bit more complex than that. All in all the words are strange but interesting, and they fit the music well.

It is really hard to add anything else. And Them Boys Done Swang is just so damn good it speaks for itself. The Electric Boys are a virtually unknown band in the US, but in Scandinavia they are living legends. They definitely deserve more appeal as they can give the young guns a serious run for their money. It is also important to note that this album, like many others, comes with bonus tracks on the Japanese edition, and in this case it is absolutely recommended you get the import as the bonus tunes are well worth the money. And Them Boys Done Swang is a really good and tight album.