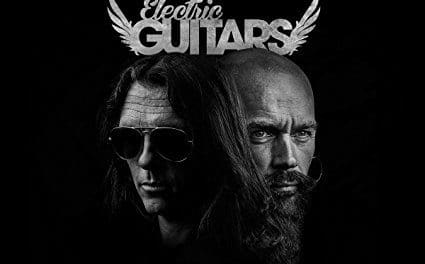 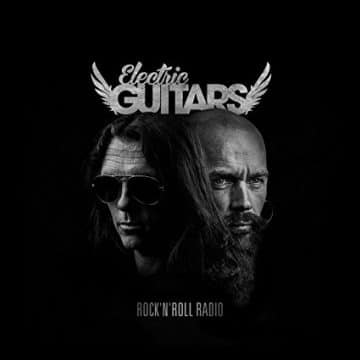 Review:
Electric Guitars’ new album Rock ‘N’ Roll Radio laments the fact that the Danish band can’t find a place on so called rock radio, despite the fact that similar acts such as AC/DC, Volbeat and Metallica are rocketing up the charts and selling out arenas around the world. Looking at the playlists of radio stations across Canada, those acts rank pretty high in terms of overall spins on active rock radio. But I get the point Electric Guitars are trying to make which is why aren’t the more organic rock bands such as them making their mark? That’s a good question, and one of these days, I intend to pose it to a radio program director friend of mine.

As I keep getting drawn back to Rock ‘N’ Roll Radio, I keep asking myself one question. Is Electric Guitars trying to produce an album that can compete with radio-friendly offerings, or are they just producing what they believe to be their genuine style of rock? Let’s consider their previous album, the unfortunately punny String Fever. Just under a year ago, I reviewed String Fever as an eclectic and rather uneven album, stating, “I’d recommend this album to anyone that likes blues rock, classic rock and modern rock but beware, you’re only going to get a couple of tracks of each genre on String Fever.”

This time, Electric Guitars offer a more balanced approach. The album is rife with catchy vocal hooks, killer guitar lines, and solid song writing. To answer my above question, it seems Electric Guitars are expanding on a premise first set out with String Fever, and carrying along those same lines with this release. They are not trying to be something they’re not, Electric Guitars just seem to be good at writing good songs.

“Rock ‘N’ Roll Radio” is the lead off track. It starts with a very AC/DC sounding intro, and even continues with an Angus Young riff, but backs it up with a secondary guitar bed and bass line that compliments the lead line. The chorus draws me in… “I need more rock and roll on the radio…”.  I guess there’s little room for argument there. The next track “False Flag Operation” has a bit of Ratt to it… think “Lack Of Communication” with the driving guitars which never let up. Again, the chorus is memorable with both the guitar and vocal lines. Something I’m liking a lot.

“Headless Chicken” — now we’re into something different. Like Jackyl without the redneck pretense, Jacob Binzer and Jezper Binzer from D-A-D offer a sleazier, dirtier sound, and have developed a solid rock song. Nothing worthy of radio airplay mind you, in my opinion, compared to the Bon Jovi esque hooks offered in the first two tracks. “Swagman” continues the darker theme, with a gothic intro featuring wolf howling and Black Sabbath like melodic plodding. No matter, the song develops into a bit of a banger. Every band needs a swag man to hawk t-shirts, CDs and guitar picks… this is an homage to those guys.

“Splinter” is another ear worm. Again, the opening riff forces me to recall AC/DC circa Stiff Upper Lip, but don’t be discouraged.  The song evolves into a sing-along soon enough, and could be considered a decent driving tune. I dislike “Bambi On Ice” and am not sure why it was included. Right or wrong, I hear some ’80s style Deep Purple (House of Blue Light era) in “Lucy Glow.”  Maybe because I’ve been listening to both albums lately.  Speaking of Deep Purple and even Sabbath, “Homewrecking Woman” has that plodding feel, with a bit of jazz/blues during the verses. Things perk up in the chorus again, but not really enough to make me want to hear the whole five minute song. Not saying it’s a bad song, just that it’s not something I’m into.

“Stay Under The Radar” is back to the full on guitars and vocals. This tune gets me going, and will be quickly added to my 2017 mix. Rounding out the ten track album is “Back To You”, which is ok, I guess. An appropriate finish but offers little in the way of innovative instrumentation, sounding more like early ’80s metal and mid-’90s grunge as a hybrid. Dio meets Cobain, perhaps.

Electric Guitars have grown in the year since String Fever. The talent is still great, but the songwriting quality has seriously improved. There are still a number of potentially “radio friendly” tracks, and a few darker selections, but it is far more balanced and the band has discovered their own sound. Note the first two Youtube releases –“Swagman” and “Headless Chicken” — are part of the darker, less accessible parts of the album… not particularly indicative of the record as a whole. In my short-spaced cranial cavity, Rock ‘N’ Roll Radio is a definite check out wherever you can.

“Swagman” is the new single from Electric Guitars, produced by Jacob “Cobber Binzer”. Released on Mighty Music/Target Group 27th of May 2016.Stream, download…