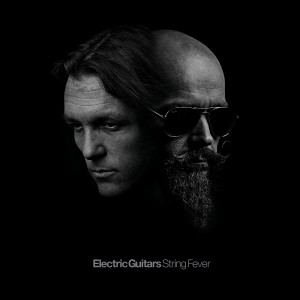 Review:
As Electric Guitars‘ press release kit says “…the two rock guitar-slingers Soren Andersen (Glenn Hughes, Mike Tramp, D-A-D) and Mika Vandborg have teamed up again with Peter Kjøbsted on bass and Morten Hellborn on drums, and are ready to spread the string fever!” The String Fever reference is a bit cheesy, but this album has some great guitar rock vibes to it. This Danish group has its sound down pat. Electric Guitars know who they are, and who their crowd is. And they rock to it, a couple of songs at a time.

Andersen and Vandborg have a great pedigree. This album is not the detailed, technical guitar work you’d expect from guitar heroes like Steve Vai, Yngwie J. Malmsteen or Joe Satriani to name a few. Andersen and Vandborg focus more on riffs and solid song creation rather than showing off their prowess with detailed note for note fretwork. That works just fine for me. In fact, the opening tracks “String Fever”, “White Flag”, and “Running Out of Time” take me back to Kenny Wayne Sheppard, or Anthony Gomes. If those names aren’t familiar, they’re blues rock artists that know how to work a guitar to create great blues based hard rock.

On the other hand, “Let it Rock” gets into more Scorpions or Lynch Mob territory. It’s got a fun vibe to it with a fist in the air feel. “Girlfriend” is my least favourite song. It’s more radio friendly and gets into territory that this album shouldn’t. I wouldn’t call it filler. I’d call it an intentional attempt at radio airplay. Oh but “She Wants my Guitar” is sexy! The female cat scratching is hot, but so is the guitar. This tune doesn’t need more cowbell! Then we’re back into more blues-based rock. As a fan, I like it because there’s a real feel to their music. You can juxtapose that with a hard rocker like “Finally Me”. It’s more of a Lynch Mob sound again. It’s almost like Electric Guitars are trying to cover too many genres such as blues, modern rock, and classic rock looking for fans from each of those genres.

The first video release “The Thinner The Eyebrows, The Crazier the Woman” doesn’t tell the whole story of Electric Guitars’ String Fever. “Running Out Of Time” is closer but put a blues rock spin on it and you’ll get there. I’d recommend this album to anyone that likes blues rock, classic rock and modern rock but beware, you’re only going to get a couple of tracks of each genre on String Fever.

New single from the upcoming album “String Fever” out on Target Records the 2. of february 2015 Denmark, rest of the world autumn 2015Band: www.electricguita…