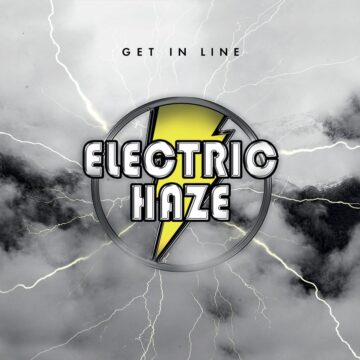 Electric Haze wear their 1970’s classic rock inspirations of Deep Purple, Dio and other such massive behemoths firmly and proudly on their denim clad sleeves according to their press releases, they then confusingly choose to open the album with the meandering “Succuba.” That track certainly fails to deliver anything that would hook you into the album immediately,  and would seem more at home on a flour covered goth band album from the mid to late eighties. “WOAH!” then follows and changes tack again, incorporating tinges of ’80s glam metal including the title chanted accordingly. This is followed by the album’s title track “Get In Line” which I  am reliably informed is the lead single. This reverts back to the classic rock stance that was purportedly their style originally but has certainly not seemed to be the case so far.

“All I Ask For” then passes by without note and in a similar vein, before “Cavern Of Pain” limps leadenly through the speakers. This is the stand-out track for all the wrong reasons. It has its elements of prog and possibly even psychedelia but, truthfully, is just a funereal dirge that seems to be completely at odds with whatever Electric Haze were trying to present with the previous tracks and is in stark opposition to their much vaunted classic rock stance. Following that aural horror, the rest of the album becomes much of a muchness. “Lest We Forget” and “Too Close To The Truth” pass by without any  incident, although “Clenched Fist” has flashes of the promise they exhibited on the aforementioned 2016 EP, the final track “Cryin’” disappears from memory as soon as it is over.

I had really wanted to like this album, particularly after liking their previous release, but – and it is a very big BUT – the songs are a mish-mash of styles and are all almost completely unmemorable, as well as melding into each other as the album progresses. With of course the exception of track five, which I am still struggling to understand the inclusion of, or indeed the reason behind its existence. All of this is a great shame in many ways since it’s competently produced, vocalist Anton Ekstrom has a decent voice and the band can actually play but it is definitely the distinct absence of decent material to work with that really nullifies the effort.

Sweden has of course provided the rock world with so much wonderful music over the decades that it is almost blasphemous to criticize anything from there, but, sadly, I don’t think Electric Haze will be added to that glorious pantheon on the evidence of this eminently forgettable album.