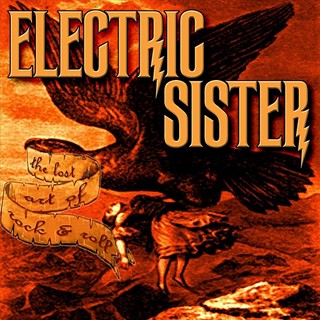 Review:
The Lost Art Of Rock & Roll is a perfect title for this release from Oakland, California newcomers Electric Sister. Clearly this band has captured an impressive, raw ‘rock in your face’ wall of sound and pounds it into your ears on every track with musical nods to Guns N’ Roses, Buckcherry, Metallica, AC/DC, even a splash of Iron Maiden and Black Sabbath. Take all these bands, shake them up, and out comes the pure rock juggernaut that is Electric Sister.

As a fan of good over-the-top guitar solos, The Lost Art Of Rock & Roll really takes it to a new dimension. “New Mother Earth” kicks the album off in true American hard rock style and serves as the beginning of the sonic storm which follows. Tracks like “The Leper” and “Rock Is Religion” are classics from first listen as the band truly shines, while “Goddess” and “City Of Night” are hands down my favorite tracks. “Goddess” has a nod towards Black Sabbath and King Diamond lyrically and is just a great metal song, while “City Of Night” is a classic hard rock musical appreciation class — this song should be the next single. The title track and first single of the album is beyond what I expected, Electric Sister really put everything into this song and it shows. There are splashes of color from hard rock’s classic sound all over this song and with its modern heavy edge rhythm this should be a staple on all hard rock radio stations.

On all levels Electric Sister performs tight original rock songs that fans of the genre should not miss. From start to finish The Lost Art Of Rock & Roll is hard rock masterpiece and should catapult the band to new heights — on a live stage these guys should be unstoppable. If rock and roll was lost, Electric Sister have found it, bit into its neck and won’t let go.