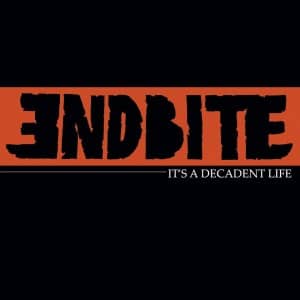 Review:
I had never heard of Endbite prior to putting their CD into my van’s CD player (three kids and a wife sadly equals van — nothing rock n’ roll about that) and my first thought was that there were a lot of different styles on this album and sometimes even within the songs themselves. Over the last few weeks, I have come to really enjoy the diversity on the album and have even grown to like some of the things that initially annoyed me about It’s A Decadent Life.

I’m usually a positive type guy but I’ll start with the negatives first on this one. I can’t tell who is the lead singer between Jeppe and Robert based on the description of what they do on the album’s liner notes but whatever the case, whomever is the lead singer will never win “lead singer of the year.” It sounds like whomever is handling the lead vocals is singing from his nose. The vocal harmonies are also quite weak throughout the entire album. The harmonies on Dokken‘s Under Lock And Key would simply bury the harmonies that can be found on Endbite‘s It’s a Decadent Life. That being said, I really enjoy the singing on It’s A Decadent Life because it’s different, it provides a sharp contrast to the sometimes heavy guitars and it’s consistent throughout. And there lies the biggest obstacle for Endbite on It’s A Decadent Life. If you can get accustomed to the singing, you’ll probably really enjoy the album because the music itself is pretty damn good. I also suspect that not everyone will listen to the album twenty times or more like I have done prior to delivering this review!

As previously mentioned, there is a lot of variety on It’s A Decadent Life and within the songs themselves. The album starts off with the title track which definitely has a bit of an old school U2 feel to it. I finally checked out Endbite‘s website in order to complete this review and noticed that the group’s sound has “strong influences of Metal and Rock but also contains hints of Country and Ska.” I don’t hear any of the country music references on Endbite‘s It’s A Decadent Life and don’t know what “ska” music sounds like but the album definitely contains some cool almost reggae like vibes at times. Endbite‘s ability to speed things up with blistering guitar solos within a song before settling back to the tracks’s usual pace is probably the band’s best quality.

I like every song on It’s A Decadent Life — warts and all. My favorite tracks are “Lower Your Expectations” with its basic but catchy and funky beat, “You’ve Done It Now” with its almost thrash like beginning before the song changes direction completely, “Hate Me Properly” with its memorable chorus and “My Doctorman” with its cool guitar riffs. Overall, I really like It’s A Decadent Life and hope that people can get past or used to the singing because there is a lot of great things that are taking place on this album. Unfortunately, I was not able to find any videos with respect to Endbite‘s new songs but they do have a prior self-titled album and you can hear a few tracks from that one on the group’s YouTube page.