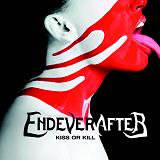 Review:
L.A. band Endeverafter has a lot of hype surrounding them, which can sometimes lead to disappointment but after several listens to Kiss Or Kill these guys seem to deliver the goods. But let me start by saying holy crap! Have you seen the video for “Baby Baby Baby” yet? Smokin’ hot stuff!

The first five tracks on Kiss Or Kill totally kick ass. The band has an 80s rock feel and sound to them, with an added up-to-date twist that should appeal to the hard rock masses. “I Wanna Be Your Man” is a pounding straight ahead rocker and “Baby Baby Baby” is one of the best songs I’ve heard in ages, although as mentioned, the video for it is almost better than the song. The way the vocals are delivered on this lyrically sleazy little number just sizzle with sexiness and for something a little different, it has a killer guitar solo at the end.

“Gotta Get Out” is almost pop-like, reminiscent of Rick Springfield, which may make some people cringe, but it’s so damn catchy it hooks you. “Next Best Thing” is hands down one of the best ballads ever, and I’m not a ballad fan, but this is simply stunning both vocally and musically – truly beautiful.

After this, things get a bit confusing and make the remaining songs somewhat of a mixed bag. After such a strong opening, Endeverafter have a tough act to follow and the CD slightly looses a bit of momentum from here on in. Don’t get me wrong, the good songs outnumber the bad songs on the second half of this CD, but a few just don’t really fit – although they all showcase some fantastic guitar work.

“Slave” seems totally out of place and would have been better left out altogether. “From The Ashes Of Sin” is a bit of an epic that reminds me of Sevendust, which isn’t necessarily a bad thing, and too much of a change of pace here, so again I don’t think it fits.

It has to be said that Michael Grant is one of the greatest new talents I’ve stumbled upon lately. Not only can he sing, play a mean guitar and overall is a great song writer, but as an added bonus he also does the most sexy licking of a guitar neck I’ve ever seen (did I mention that video?). If you ever felt the desire to make love to a guitar this is probably how it’s done. Grant is arguably one of the most gifted guitarists to emerge in recent years.

This is a great debut and although a couple of songs don’t quite work or mesh, maybe because they are a bit too modern sounding for my taste, I can’t really fault this album.

Endeverafter really do have an edge, diversity and a variety of styles on Kiss Or Kill that should have something to please everyone. This is attention grabbing stuff, and don’t forget to check out that video.