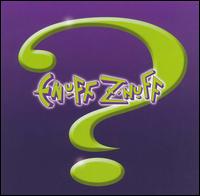 Review:
This album may be touted as a new release featuring all the original members (which it does), but in fact it is a collection of songs recorded over the last ten years. So it isn’t surprising that this sounds like Enuff Z’Nuff, however a bit mellower than some of their previous releases. But all the pop sensibilities and huge harmonies are here and fans of the band should enjoy “?”.

“Home Tonight” is a slow acoustic song with an incredible chorus; this is exactly what Enuff Z’Nuff is famous for. “Help” is much the same, although not quite as impressive. “Hang On For Life” has the band rocking as hard as they can, with a pretty dark guitar riff, and it works well. “How Are You” (from the same Vitamin A sessions as “Home Tonight”) is simply an acoustic guitar and vocals on the verge of cracking, but it works perfectly. “This Guy” has the group rocking with that laid-back meandering style they have mastered over the years.

Aside from “Joni Woni”, the band rarely misses the mark. If you were an Enuff Z’Nuff fan before you should enjoy this album – and if you hated the band you likely still will. I sometimes wonder how Enuff Z’Nuff got lumped into the 80s rock scene, as they aren’t your typical rock band. But their mastery of harmonies and multi-layered vocals is hard to ignore. “?” may not be the band’s best work, but it isn’t their worst either – just another quality product from Enuff Z’Nuff (www.enuffznuff.com).