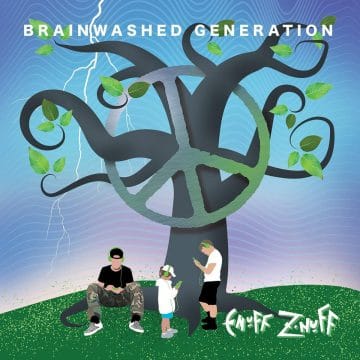 After the 39-second, gospel-tinged / piano-led instrumental opener “The Gospel,” first single “Fatal Distraction” kicks off with a nod toward Cheap Trick’s “Clock Strikes Ten,” which incidentally features Cheap Trick’s Daxx Neilsen on drums, decorated with an infectious chorus. Follow up track “I Got My Money Where My Mouth Is” has a huge, hooky chorus with massive vocal harmonies that stays with you long after the track ends. In fact, tracks such as the aforementioned “I Got My Money Where My Mouth Is,” “Help I’m In Hell” and “Drugland Weekend” are saturated with highly memorable choruses. The anthemic “Strangers In My Head” features a guest spot from original Enuff Z’Nuff vocalist Donnie Vie, who is in peak form here with his soaring vocal harmonies, complete with a hooky chorus and underlying haunting organ melodies. The heartfelt “It’s All in Vain,” featuring The Winery Dogs / ex-Dream Theater drummer Mike Portnoy, significantly strikes a chord lyrically with what’s happening in the world today.

With regard to “Drugland Weekend,” if you were wondering what “inaudible lead guitar” from Ace Frehley means on the credits, here’s what Chip told me during a recent phone interview: “I sent him the tracks and one of them was “Drugland Weekend.” I got the email back and I couldn’t hear the guitar. He didn’t have time to go back and fix things up. So, I just put it on the record, track 7, ‘Ace Frehley, inaudible lead guitar,’ because you couldn’t hear it. So, I played the solo on that song. If you listen really close, it sounds like Ace. When people hear it, they say Ace sounds great here… but it’s me.”

Not unlike AC/DC or Motörhead, one always knows what to expect sound wise from Enuff Z’Nuff from album to album. Even with Chip’s switch to lead vocals, starting with their last album (in which he originally received Vie’s blessing), Enuff Z’Nuff have maintained their trademark DNA. Chip & Co. keep the band’s legacy alive on Brainwashed Generation by mining another 14K gold gem in the band’s collection.