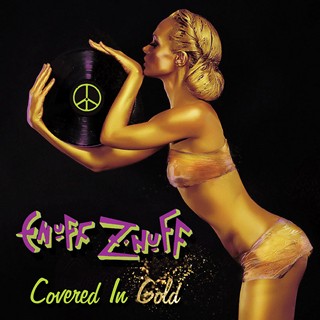 Review:
Like a bad Taco Bell burrito, or a cockroach at the world’s end, Enuff Z’Nuff are still lingering around 25 years after their inception. Love them or hate them, they have kept generating album after album since their debut release and accompanying hit single “Fly High Michelle” back in 1989 — and in spite of the band’s inner turmoil over the years, they have soldiered on.

So how does Enuff Z’Nuff elect to celebrate their 25 years of existence? Well with a covers album, that’s how. It’s not exactly the most conventional idea, however it beats re-recording an album’s worth of material from their back catalog. The new album is titled Covered In Gold, and you might assume it’s a mixed bag of recut classics — most of which have been released on various Enuff Z’Nuff albums in the past — like The Beatles‘ “You’ve Got To Hide Your Love Away”, John Lennon‘s “Jealous Guy”, Cheap Trick‘s “Everything Works If You Let It”, and Nirvana‘s “All Apologies” — all of which are damn right brilliant. Then there are of course tracks that leave you wondering why? The worst of the bunch are the cover of David Lee Roth‘s “Yankee Rose”, Prince‘s “When Doves Cry”, and The Greatest American Hero TV sitcom theme “Believe It Or Not”.

If Enuff Z’Nuff are covering anyone they should really stick to Cheap Trick or The Beatles as they really shine and bring new life to those songs — anything else just doesn’t really cut it. Covered In Gold is a fair collection of tracks that essentially is for the die-hard Enuff Z’Nuff fan that is a completist (although such fans likely own the majority of these songs already) — anyone else might just overlook this.