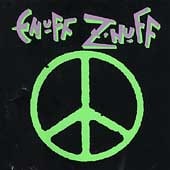 Review:
The debut effort from Chicago’s Enuff Z’Nuff was a mildly successful release in the late 80s, expanding beyond the typical hair metal genre.

The single “New Thing” (#67) has an upbeat feel and sing-along chorus while “In The Groove” and “Finger On The Trigger” make you wanna rock hard. Enuff Z’Nuff‘s biggest hit (reaching #47 on the charts), the heartfelt ballad “Fly High Michelle”, deals with suicide and the losing of a loved one in a very sensitive manner. It was dedicated to the memory of one of Donnie Vie‘s friends that sadly passed away. Vocals are very smooth, the musicianship tight and the sound is very similar to Pretty Boy Floyd.

Enuff Z’Nuff rocked hard with a slightly artsy sound, but pulled it off extremely well. A revamped version of the band is still together making music and I’m glad to say and this CD deserves two thumbs up! www.enuffznuff.com