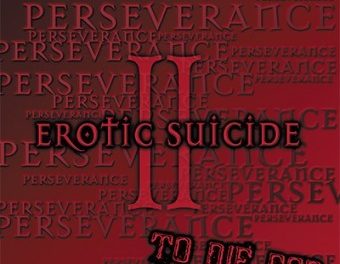 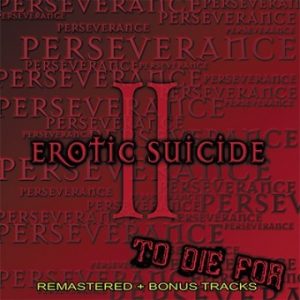 Review:
Those avid and devoted followers of my reviews (like two of you, not counting my cats) know I am a die hard glam fan. The more colorful and flashy, the better. Tigertailz, Heart Throb Mob, Swingin Thing and a makeup bag full of others. One of my all time faves in the early days was Erotic Suicide (out of Oklahoma, USA of all places) and the early demo and subsequent first album Abusement Park, simply blew me away. Their combination of a slightly rougher street wise glam look and the melding of sound from a more metalized Faster Pussycat, with touches of Skid Row and New York’s Spread Eagle, just combined to please me to no end and made the band a constant in my CD player, both at home and in the car. Business issues allowed me to interact with the band on a regular basis and from there gave me some insight on the creation of this — their second and final endeavour — Perseverance.

The title fits it to a “T”. When reading the liner notes, it gives some insight on the title and life of the band. There were so many hurdles including band member issues, the pressure to move to LA, to become the new “it” band and with the looming shadow of grunge, which like a radioactive fog, simply decimated and melted away so many dreams of many glam and hair band hopefuls.  Despite this, Erotic Suicide managed to create a simply stellar album, which dropped a bit of the bubblegum and color and took on a slightly harder edged sound, similar to that of Skid Row’s Slave To The Grind and a bit of early Pantera. And also now with the title, it applies to those fans and friends of the band that after all these years, seemed to persist and yes “persevere” for a new and remastered release of this two disc CD released by FnA records.

Existing fans of the band knew that Erotic Suicide adopted a heavier, straightforward sound and opening number “Hurt” gives new fans alike, a perfect introduction to this new sound. The slow build up of the guitar feedback, the drums which kick in, before all coming together in a chugging rhythm, it’s just so metal and you can’t help but smile and headband, air guitar, etc. Listen to the riffing on the chorus — it’s just amazing. The same heaviness shows itself again on “Can’t Stop It” and the great interplay between guitars and vocalist just makes the song come alive. I own the original CD and with this remaster, the sound is brighter, the drums have a more openness about them, and it’s a bit louder overall, so the songs just jump out of your speakers.

Singer Rach Rose, has that cool raspy voice, similar to Taime Downe in some ways, but with more of an edge, more attitude, so with songs like “Same Ol Thang”, he can carry the raspy, glam feel but then on the song “Scream”, can carry a more powerful tone and have you “screaming” the chorus with them. The dual guitars of Kyle St. Clair and Billy Stevens come together to create some catchy dynamics in the songs that grab you with the glam style riffs but surprise you at the same moment with the heavy nature of their playing. It’s kind of the same feeling you got/get when you listened to Slave To The Grind after coming off listening to Skid Row‘s debut. The album contains plenty of dynamics that range from those heavier tunes and to the glam anthems like “Same Ol Thang”, “Devil’s Daughter” and then to more mellower, moody tracks like “Cross The Line”, the sentimental (but not sappy) ballad “Weekend One Night Stand” (with vocals from guitarist St. Clair) to even the touch of humor lyrically on “I Want.” So along with this, the remaster of the original material, the real selling point is the second bonus CD which contains six songs of new, demo and unreleased material.

With the bonus CD, it’s kind of a smaller version of the main CD with the type of songs and styles with the only difference being the sound quality from song to song. The first song “ESX” is a heavier number with so-so sound quality. “Coming Down (Sweet Tomorrow)” is a semi-ballad, again with the semi-good sound quality where you hear minor fluctuations in the sound. “World Has Its Way” is much the same. “What the Hell Did You Get Me” is a fast paced rocker with great, humorous lyrics on an aspect of life we have all felt at one point in our lives. “One Way To Get It” is another rocking glam anthem. With these last two, it seems they are straight off the album in sound quality. They are great additions to the overall package and good to have them see the light of day for the longtime fans of the band and for the new that are sure to come aboard. On the subject of being a fan, I am a bit disappointed with the lack of some words from the band themselves about this release and maybe even some unreleased and unseen pictures in the booklet would have been a nice addition.

All in all, a great release and for those who never got to hear of one of the more underrated and quality “hair” metal bands that have stood the test of time with their songs. So support the genre, support FnA records and most of all support/thank the band for some great music.

Reviewed by Will “Bones” Lee for Sleaze Roxx, May 2016