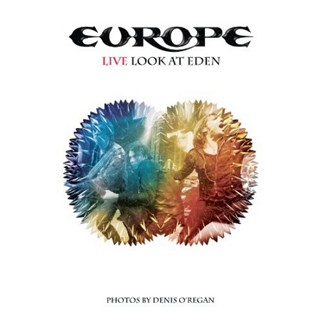 Review:
Ladies and gentlemen, welcome to the ‘earbook’ version of Europe‘s Live Look At Eden. The ‘earbook’ being the latest concept in format marketing… or the latest rip off, depending on your point of view.

Admittedly for the die-hards, this beautifully packaged hard cover book includes a storming live CD featuring a total of ten tracks taken from Poland, Sweden and London together with a DVD offering a short, sizzling set at London’s Roundhouse. In the book itself Denis O’Regan‘s moody black and white photographs chronicle a tour where the band are clearly savoring every moment of a comeback that has far exceeded the expectations of many — and that includes the band themselves.

Whilst a whole raft of ’80s bands have returned and often served up the same old same old, Europe have succeeded in spending the last eight years reinventing their brand of melodic rock. Only they seem to have achieved the holy grail of managing to deliver a touch of nostalgia whilst sounding fresh, vibrant and dare I say it… relevant.

The DVD is the real gem here and, sadly, all too short. Joey Tempest‘s vocals are flawless as the sprawling Zeppelin-esque “Last Look At Eden” opens the set. “The Beast” has guitarist John Norum riffing like a man possessed while “New Love In Town” (written for Tempest‘s newborn son) tugs at the heart strings like “Carrie” never could. “No Stone Unturned” hints further at a progressive direction and “Rock the Night” takes a rabid audience back to… you know when.

The audience’s affection for the band is plain to see while watching Live Look At Eden — Europe‘s future is assured, at least for the future to come, and look out for a new studio album, Bag of Bones, due in April.