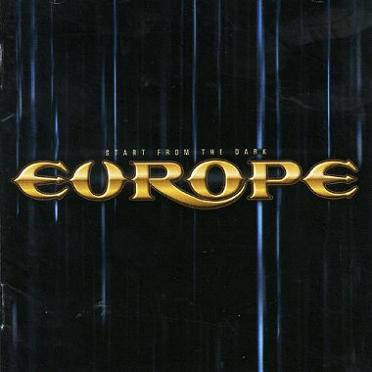 Review:
The other night I was checking out some sites trying to find tour dates for the summer and I happened across the best and most solid real rock show on the radio, The Tour Bus. While checking out that site, I saw a link to the official Europe site. I thought, “Hmm. Wonder if they’re up to anything.” Well, they were!

They released a new album in late 2004 and are on a world tour! So I picked up the CD to see what the band known best for “The Final Countdown” can do in 2004. I had low expectations – consider me pleasantly surprised!

This record is a solid rock outing. It’s not going to set the world on its ear but it will give you some incredibly catchy songs that you’ll sing all day at work. “It’s A Small World After All” has nothing on this record!

Some solid tracks to look out for are the opening track titled “Got to Have Faith” which is a very uplifting melodic rocker. The title track, “Start From The Dark”, is one of if not the best tracks on the disc as it is incredibly catchy and has one wicked guitar solo by Mr. Norum. After his meltdown on the road with Dokken, I’m so glad the man is back with Europe and performing again – amazing guitarist and vastly underrated.

Other cool tracks are “Hero”, which I may play if I ever am lucky enough to interview Hulk Hogan on my radio show, as well as a song called “Sucker” which reminds me of Foreigner‘s “Jukebox Hero.”

Another one to listen for is “Roll With You”, a very sweet song that proves a couple of Swedish dudes can write and record some real good songs!

A song that some would call a throwaway song is “America” – I don’t agree. I think it has a really good guitar work and a driving beat and I honestly think it’s one of the best songs off the album!

The keyboard influence that made The Final Countdown such a huge hit has been cut down a bit. I’m glad, actually. It’s sort of like Kansas having that damn violin, sometimes too much keyboard was a bad thing in Europe music. But it is used tastefully on this album.

As for the vocals, I’d say the guy still can sing. I can’t say if he can or cannot hit the high notes anymore because there aren’t any overly high notes on the disc. He belts stuff out real well and goes somewhat high but I don’t think the opportunity to hit the notes one would make by wearing insanely tight spandex presented itself.

Overall, I think you have a pretty solid collection of good songs, a few great ones, and a few that you could take or leave. I like it and have been playing it for a week or so now and have yet to shelf it so it clearly is more than just a “one listen disc.” If you’ve got the money, pick it up! www.europetheband.com

Reviewed by James for Sleaze Roxx, May 2005.