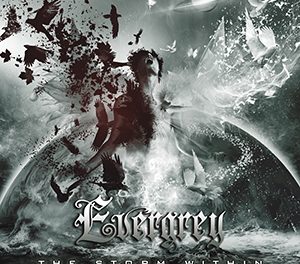 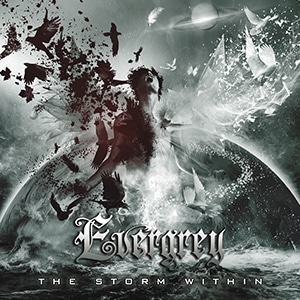 THE STORM WITHIN
To be released on September 9, 2016 (AFM Records)

Review:
I’ve been very much looking forward to Evergrey‘s new album The Storm Within since they utterly impressed me when I saw them live last year, and also after releasing their previous album Hymns For The Broken, which marked a return to form for the band.

The album kicks off with a nice heavy start with the songs “Distance” and “Passing Through,” the latter being instantly memorable and full of amazing guitar riffs accompanied by Evergrey‘s trademark brooding keyboards. “Someday” and “Astray” are both hard hitting power/prog metal with a very dramatic performance. Very, very Evergrey.

“The Impossible” features a very emotional performance by Tom S. Englund on vocals joined solely by a piano. The rest of the band then joins in for the ultra-heavy “My Allied Ocean.” The always excellent Floor Jansen guest sings on two tracks on the album and the first is “In Orbit” resulting in a very impressive duet where both singers shine.

“The Lonely Monarch” shows the heavier side of Evergrey and ‘The Paradox Of The Flame’ slows things down a bit featuring Englund‘s wife Carina with both of them displaying a very sentimental performance and beautiful violin arrangements. Jansen comes back, mostly in spirit only doing background vocals, on “Disconnect”, a heavier and more progressive song filled with momentum. To close the show comes the title track “The Storm Within” delivering symphonic prog-metal with more lovely keyboard work, riffing lead guitar, and of course Englund‘s alluring vocals.

The Storm Within is filled with haunting melodic metal loaded with atmosphere and it’s certainly one of the most progressive and diverse records in the band’s 20 year career. In fact, much of The Storm Within reminds me of the glorious The Inner Circle and especially of In Search Of Truth by capturing an impressive range of emotions and having keyboards put back on a more dominant role, especially in the second half of the album. A lot of heartfelt passion was put into this music. It’s evident that this is a very melancholic subject for Tom S. Englund.

The whole concept around the lyrics as described by Englund is: “having someone, losing them, and having to pick yourself up and move on,” which is likely very relatable to anyone. Still, there’s a lot to discover since lyrics have different meanings for each of us.

If Hymns For The Broken wasn’t enough proof that Evergrey are back in a big way, take a listen to The Storm Within and you should be convinced as the band is creating albums that are on par with their early years.

EVERGREY – Distance (2016) // official clip // AFM Records”Distance” is the first of a series of videos we have shot for “The Storm Within” album.Working ver…