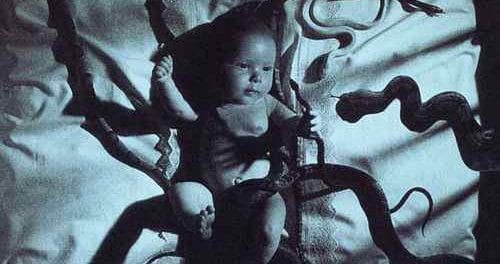 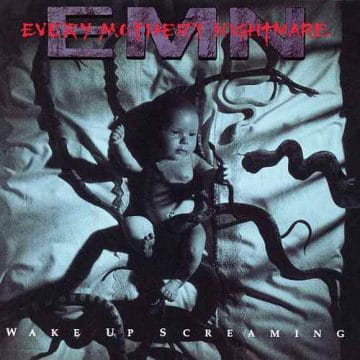 Review:
Every month my friend, mentor and head honcho, Olivier at Sleaze Roxx sends out a list of the month’s upcoming anniversary releases. The list for January 2018 was very astounding to me. I think since I started writing for the site back in November 2016, I have not seen so many great albums that I’d love to talk about. On this list is an album, that although it never gained serious notoriety, is a true gem. Every Mother’s Nightmare’s second Arista Records release Wake Up Screaming is up for conversation today. My take on this album may be slightly different from what you the reader may be used to. Please keep in mind though, through my ever so imaginative thought process, I wanted to convey how this album pertained to my life back in 1993. It is exciting to share with all how this album pertained at the time to me as a young adult. Hopefully, by the end, you will understand the relevance. Possibly also at the end if you choose to share your experiences in regards to this release, I am always obliged to read. I actually look forward to reading the comments. Reading someone else’s positive take — and I do really hope positive — really makes my writing even more worthwhile. Thank you and please enjoy my friends.

So our story begins in the spring of 1993. Picture it in your head — a very skinny, guitar playing 18 year old with long strangely hair (maybe a mullet, you decide), in tight Levis jeans and Reebok high tops with aspirations of being the next great guitar wiz of his generation. With his 1988 Charvel Model 4 — a gift he received from his parents for a job well done in high school, to which he still owns to this day — firmly attached to his side at all times, our young aspiring rock God in the making decided to form a band in what would be termed in the vein of his heroes like Mötley Crüe, KISS and current favorite Slik Toxik. Under The Influence would be the name of his band. The group quickly started writing songs that would appear on the band’s one and only low budget demo, paid for by bassist Joe Petralia’s father. This demo was a collection of Mötley/KISS sounding compositions with singer Darrin Campbell doing his best Vince Neil impersonation. At the time, Under The Influence would listen to many bands to gain inspiration from.

Between rehearsals, the band would hang out regularly at singer Campbell’s residence in Oshawa, Ontario, Canada. One day, our aspiring guitar player would walk through the door of the Campbell residence with new music in hand. The guitar player had just made a voyage to Zap Records in Cobourg, Ontario, Canada with an older and wiser gentleman named Hughie Beauchamp. Beauchamp was a kind, gentle soul who took the young guitar player under his wing and taught him all about the intricacies of listening to music properly. Beauchamp always had the best set up for listening to music. Two chairs set up in his apartment directly in front of a very high tech, expensive system. There they would sip tea (Beauchamp did not take part in alcohol consumption for reasons unknown), talking about what they were listening to and making the odd joke along the way. Using the perfect analogy, Beauchamp was the Mr. Miyagi from the Karate Kid to this young guitar player.

Occasionally, Beauchamp would call up his young protégé with a plan of taking a drive to Cobourg, Ontario, Canada to Zap Records where the two would chat for hours with then owner Jim Zap, carousing through the vast array of material. On one such occasion, our hero asked Zap if he could order a couple US imports for him. The two releases in question were Southgang’s Group Therapy and of course our very topic of the day — Every Mother’s Nightmare’s Wake Up Screaming. Zap responded to our young guitar God with a sigh and stated, “Of course my young friend, it will take a few weeks. Just keep in mind due to customs, these CDs will have the packaging taken off them, but will be of pristine condition. I will call you when they arrive!” Within a few weeks, our young hero would receive a phone call from his friend and mentor Beauchamp stating that the CDs had arrived. Quickly, the two music afionados jumped in Beauchamp’s ’80s Chevy Malibu wagon and made the half hour journey to Cobourg. Success!!!

Fast forwarding a couple days and getting back to Under The Influence, our guitar player would play these two new CDs regularly for his bandmates. Bassist Petralia really thought these releases were decent and fit with the times. Petralia, like our young guitar God, would later discover Southgang guitarist Butch Walker as a solo artist. To this day, the two still have nothing but the utmost respect for Mr. Walker‘s talents. Of course, the drummer of the band, Mike Desbarres, was always intrigued by any hard rock music. Truth be told, at the time the young guitar player had truly found his musical sole mates. The four members of the band hardly ever disagreed on the sound of the band. They just played off their similar influences and generally had a good time. As the band sat and listened to the Every Mother’s Nightmare’s latest release, they analyzed all that was going on.

The album opens with the stellar track “House of Pain.” It starts off slowly, with a melodic sensibility, but soon becomes a straight ahead in your face rocker that does not disappoint. “Closet Down The Hall” continues the onslaught metal attack. A true inspiration for the sound that Under the Influence was looking to achieve. “I Hate Myself” may be one of the best compositions on the album. The slow groove really is infectious. One thing that the band may have noticed upon listening is that the production itself may have been lackluster compared to Every Mother’s Nightmare’s counterparts Slik Toxik and Southgang. Still, it had a true rawness somewhat like Mötley Crüe’s Too Fast For Love, which was a huge inspiration to our young band. “Already Gone” was a brilliant ballad that would fit in perfectly at the time with anything being played on top 40 radio.

As Under The Influence got to track five, they quickly recognize a familiar sound. “Tobacco Road” — originally recorded by Blues artist John D. Loudermilk in 1960 — but made famous once again by David Lee Roth in 1986 on his Eat Em’ And Smile album. This version was closer to Loudermilk’s than that of Roth’s. Of course, guitarist Steve Vai, bassist Billy Sheehan and drummer Gregg Bissonette played on the Roth version. Three virtuosos in their own right, but with no disrespect to the talents of Every Mother’s Nightmare guitarist Steve Malone, bassist Mark McMurtry and drummer Jim Phipp, this version is what can only be expected by a young band from Memphis, Tennessee, USA. Keeping the original blues element of the song remains firmly intact. Singer Rick Ruhl‘s raspy, bluesy vocal really makes this track work. “Slip And Fall” is yet another slow, groovy rocker that features a fantastic sing along chorus. The perfect example for Under The Influence to learn and grow from. A great way to hone the band’s song writing skills. “Good Die Young” and “Break Down” — still great tracks in their own right — are not as memorable as the previous compositions. They are tracks that could be called filler, but relevant enough to keep the flow of the album moving.

“If I Had My Way” may be termed as another cover song of sorts. Originally written by former Autograph front man Steve Plunkett, it appears on Plunkett’s 1991, Quality Records release My Attitude. This song shows off Plunkett’s keen sense for writing a hit song that never became a hit song. With that said, let’s remember how many great artists were releasing albums on a regular basis. There was only so much success to go round. “Bang To The Bone” features a great ’80s type tongue in cheek lyric that fits well amongst this album of great songs already heard. The last two tracks — “I Needed You” and “Cryin’ Shame” — close out this stellar release perfectly. For a young band like Under The Influence, a truly enjoyable listen to learn from.

As we close out, the question that may be asked is “What ever became of Under The Influence?” Well, like many stories told of young bands of the past, they faded off into the sunset. Things change and people move on. Looking to 2018, our young guitar hero, is now an older, wiser guitar hero who never quite achieved the success he had hoped for all those years ago. There was a stint playing in a Bon Jovi tribute band for many years that included many great gigs flying and driving throughout Canada. Not exactly what our hero had envisioned, but still keeping the dream alive. He currently resides in Oshawa, Ontario, Canada with his beautiful wife Jessica. The two can be seen playing locally in a country/rock band called Briden on occasion. Briden is currently looking forward to recording their debut album with singer/producer Mitch Malloy. He also keeps his musical knowledge sharp by writing for the excellent ’80s hair rock site Sleaze Roxx.

As for the other three members, our guitar hero is still in close contact with all in question. Singer Darrin Campbell is raising a family and singing on occasion when called into duty. Bassist Joe Petralia is remaining relevant as he plays bass in a great band called Valyear. As for drummer Mike Desbarres, he was still hitting the skins hard until a shoulder injury sidelined him slightly. He still has that fire in his eye, with aspirations of becoming a well-schooled vocalist. It may also be noted that Desbarres was the original drummer in our guitar hero’s band Briden before the shoulder injury halted his dream. As for our Mr. Miyagi, Hughie Beauchamp is still alive and well, living in Orono, Ontario Canada. It has been some time since our hero has been in contact with him, but there is always hope that their paths with meet again at some point.

Now as we close out, I must apologize for so much going on within this review in regards to the story of Under The Influence rather than that of Every Mother’s Nightmare, but with an album from the past, comes a life and how it relates — a time, a place, a memory. That time in my life was special. It was only fitting to share with you, the reader, how much this release means to me.

Every Mother’s Nightmare – House Of Pain

Every Mother’s Nightmare‘s “I Hate Myself” song:

Since I can’t find lyrics for this song anywhere, I decided to try and make my own video. I apologize for any incorrect lyrics, I had to listen closely and h…