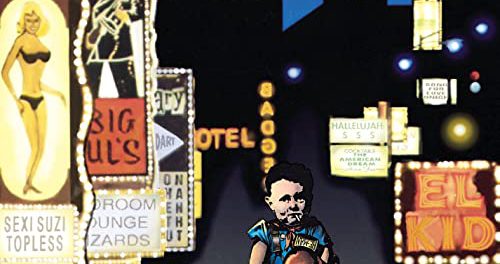 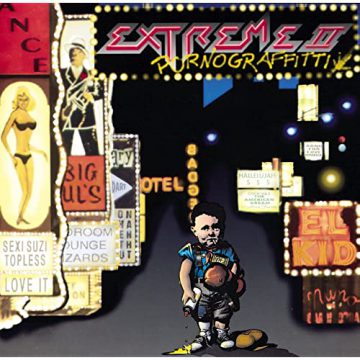 Review:
It was a stifling hot day in 1990 when I made my way down to the mall and hit the record store to pick up the latest Extreme cassette. Even before I left the parking garage, the cellophane was on the ground and the tape was in my car’s deck. I really liked what I heard on their previous self-titled album with “Kid Ego”, “Muthah (Don’t Want To Go to School Today)”, “Play With Me”, etc. so I needed to get Pornograffitti. What I heard between the parking garage and the open road blew me away. I’ve been a fan ever since. With Pornograffitti, he band from Boston hit the Billboard Top 200 at #10, and it is Extreme’s best selling album. “More Than Words” was a #1 hit and “Hole Hearted” reached #4 on the charts. Yay! There is really so much I loved about this album, and still do, that I’m not sure where to start. But those two songs are not the best of it.

The rain sounds, ominous keys, banging on pipes, all lead into a bang on “Decadence Dance.” As a teenager, the idea of “trying to keep up with the Joneses” was a foreign concept. Thirty years later, it makes more sense, but still, screw that idea and I get what the tune is saying. There’s so much going on with this song instrumentally that it’s hard to keep up with individual instruments.  The chorus alone is catchy enough to lock in the listener. At least on my cassette copy, the gap between “Decadence Dance” and “Lil Jack Horny” was seamless. This track is pretty unique to the 1990 scene, incorporating funk, horns, a bit of rap, and other elements in order to stand out from the so called hair-metal pack. And it’s not the only one. In fact, much of this album seems to buck the whole scene at that time. “When I’m President” both pokes fun at the idea of, yet also reinforces the idea that anyone can become the President of the United States. If you watch any ’80s movie about the underdog wanting to become student body president, this song speaks to that.

“Get The Funk Out” might be my favourite song on this album with literally a funky beat, great guitars and an infectious bass line.  I recall by 1992 there was a pretty hot club mix, which didn’t change the song at all, except for adding a more aggressive (digital) drum line. This official link is about the closest I can get to the remix. At this point in most albums, bands change tack and move to a ballad. Well, before that happens, I’d like to take a moment to compliment Michael Wagener and his production of Pornograffitti. Wagener has been at the helm of albums from Skid Row’s debut to White Lion’s Pride, and mixed Ozzy’s No More Tears and Metallica’s Master of Puppets. In my opinion, this Extreme album is one of the best sounding records of the era.

Back to the album itself. Track #5 is the ever lovable “More Than Words”, and yes, I say that sarcastically. It is objectively a beautiful acoustic song played well by Nuno and sung flawlessly by Gary.Listen to it again, but forget that it’s played to death on radio and at many weddings, still not exactly the right message ultimately.

What exactly is more than words? Hmmm. Seems kind of sexist by today’s standards, but it’s still a nice ballad nonetheless.  Musically, compare it to concurrent ballads like Skid Row’s “I Remember You”, Aerosmith’s “Janie’s Got A Gun”, or “Without You” by Mötley Crüe.  “More Than Words” absolutely stood out from the pack, in my opinion. There’s some good instrumentation on “Money (In God We Trust)” and even though I’m currently working off a digital copy, I think this was the finale of side one on the cassette. A good choice to not blow away the previous ballad, but still edgy enough to lead me to hit auto-reverse before the beep.

Time for Side Two. “It’s (A Monster)” is in your face from the beginning. Highlighting both the Cherone vocals and very tight instrumentation, this is a solid track from start to finish. Title track “Pornograffitti” highlights Nuno’s playing style and again the funky roots this album is based upon. The lyrics speak to the media fixation of “sex on the brain” during that era. Pornograffitti refers to the hyper-sexualized era of the late ’80s and how that cannot be sustained… although, 30 years later, what about that?

So all of that blazing rock provided didn’t prepare me for “When I First Kissed You.” This is a piano centered track, featuring Cherone’s vocal, as presented as a lounge lizard. To this day, I’m not sure if this was meant to be genuine or just trolling. David Lee Roth tried it years before and meh. I guess they pulled off whatever they were trying to do, but yeah, it was alright. Next. That would be “Suzie (Wants Her All Day Sucker).”  Well, that title doesn’t hold up in today’s uber polite society, and neither does the lyric composition. Putting that aside, the amazing guitar line interspersed with horns and vocal stabs works as a track. That break around 2:40 really grabs me every time. One can like a song without agreeing with the lyrics, right?

Can we take another break here, to recognize just how good Nuno Bettencourt really is.  Yes, you heard his talent on this album and other Extreme output. More recently, Nuno toured with Steve Vai, Zakk Wylde, Yngwie Malmsteen, and others in the Generation Axe reflection of all of our guitar heroes. Bettencourt is indeed one of the fastest players out there, and can also produce some decent funk based metal, as highlighted by Pornograffitti.

Back to the album and the reason I bring up this point. Track #11 is called “He Man Woman Hater”, but begins with Bettencourt’s “Flight of The Wounded Bumblebee”, which is a red bull fueled cover of the classic Riminksy-Korsakov original. Nuno’s speed and accuracy are amazing. Proof of this talent comes from a later YouTube live video posted here. The “He Man Woman Hater” track kicks off with the statement, “No women allowed.”  Those phrases date back to the old American TV show, Little Rascals from the ’30s. I recall in 1990 passing a note across the high school classroom telling a girl I wasn’t a he-man woman hater. Not only did the girl actually get the album reference, we ended up dating. I wasn’t about to turn down a girl who got an Extreme reference. I’m better now.

It was almost like Extreme were trying to toss multiple concepts into the air, and the record company decided on the outcome. “Song For Love” is on the surface an alright sing along ballad, but it ultimately works against the rest of Pornograffitti.  It is more Crüe’s “Don’t Go Away Mad”, a needed anthem to encourage fans, rather than a well rounded track. As I listen to it today, it’s not awful, yet should not have been part of this album, just like “When I First Kissed You.” Finally, we close the album with “Hole Hearted.”  Just like with “More Than Words”, this song has been way overplayed, which diminishes its real quality. However, try it again and you’ll find this is an excellent track. Bettencourt’s brilliant phrasing, the subtle inclusion of acoustic bass and a thump board, and Bettencourt‘s excellent slide overdubs. Cherone’s vocals soar here… even though there is clearly jump-cut vocal editing at some points. Hey, that said, a circle can’t fit where a square should be.

Not that I ever needed a particular break from the Skid Row, Poison, Priest, Pantera, etc. but Extreme’s Pornograffitti took a leap. In 1990, Pornograffitti was a kick out of both hair metal and the shift toward the heavier gutter rock, instead offering a different sound capitalizing on funk, horns, and talent. Of course, I love the former bands, but all I’m saying is that Extreme gave me something unique as a 16 year old. It was absolutely the band’s best album and a key pivot in 1990.

Extreme‘s “Get The Funk Out” video: