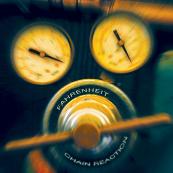 Review:
Who would have expected the best pure sleaze album in years to be delivered by a band from Chile? Fahrenheit is an appropriate name as this disc is smokin’ hot, bouncing gracefully between the pop sensibilities of Heavens Edge and early Bon Jovi and the dirt and grime of Zodiac Mindwarp and Spread Eagle. Hopefully the band has a good following in Chile, because with the sleazy lyrical content and America’s recent attack on free speech this album is bound to get as much exposure as a newspaper reading convention.

How can anyone resist cranking the indecent opening tune that has a chorus proclaiming, “You gotta get laid on your prom nite baby”? “Unleash The Love” burrows itself inside your head with incredible fretwork and a melodic delivery. “JB Solo” proves that young Javier Bassino is a guitarist to watch – he is incredible throughout the album – before morphing into the supercharged “Roadkill”. The group almost fuses elements of trash with their sleaze delivery on “Black Star”. Throw in a couple Bon Jovi type ballads and you have the makings of one incredible album.

During “Chains ‘N’ Cellars” when vocalist Chaz Thomson states “now get ready for some fucking guitar”, you better take notice, cause this entire album is an onslaught of riff after riff. It is a shame that a group this entertaining will only be heard by a few people. Make sure you are one of those people by buying the perfect Chain Reaction at either www.fahrenheitonline.net or www.perrisrecords.com.