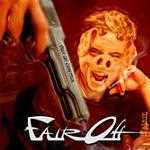 FAIROFF
OUT OF CONTROL
Released 2006 (SMD)

Review:
This Brazilian band had me worried. Their press release contained a photo of the group wearing pig masks, and between that and the CD artwork everything screamed alternative. Then the piano intro of “U” came spilling out of my speakers – I could see this was going to be a hard review, because mediocre albums are a bitch to write about.

But at around the one minute mark of “U” things started to kick into gear. Guitars showed up, the vocals got more aggressive and the melodic rock leanings started pouring out. Fairoff had obviously mastered the art of building up a song, using slow segments to make the faster areas seem even more potent. “Time Has Come” is the band at their heaviest, and the vocalist sets aside his silky voice for one song to deliver from deep inside his gut. I think “Not In Paradise” is the stand out track though. It is mellow, with guitar lines hiding in the background, and slowly builds itself up to a soaring chorus.

Fans of melodic bands like Transit or Pole Position should enjoy Out Of Control. The vocals are going to be a love or hate thing, but they are unique, they don’t really remind me of anyone. So forget about the silly pig masks, this disc shows that melodic rock can come in all sorts of disguises.