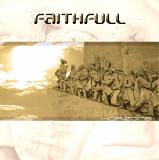 Review:
Remember when music was fun and made you feel good? It was probably around 1988. Granted there is a lot of music around today that I do enjoy and some recent releases have restored my somewhat jaded faith in today’s music scene, but with Faithfull‘s second release Horizons, you really get a blast from the past with good time party rock.

The perfect opener is “Time Flies”, which has lyrics such as ‘living life with a smile’ and this sure makes you want to do just that. It conjures up images of summer and I just want to jump into my red convertible with the top down with Faithfull cranking out through the tape deck (if I was lucky enough to have a little red corvette that is). If this song doesn’t make you want to get up and dance around the room nothing will. I could listen to this tune 30 times, and I probably have! But to review a CD I have to listen to the whole thing, so I reluctantly move on from this gem of a song.

The only thing to say is that the rest of the tunes that follow are more upbeat feel-good ones – I feel this urge to insert smiley faces here if I could. It’s all melodic rock magic, Horizons is a consistent CD with no filler in sight. “Who’s The Face” is ballad-like in the style of old Bon Jovi, and Sergio Sabino‘s voice could give Jon Bon Jovi a run for his money on this one. “Blindfold” is more toe-tapping stuff.

Picture this; imagine mixing up in a blender a cocktail of bands like Blind Date and Attraction, splash in some Danger Danger, throw in some big, catchy choruses, chuck in some great backing vocals and punchy guitar for good measure, whiz it up well and you get an idea of what Faithfull is like.

If you’re attracted to late 80s styled fun rock then Horizons is the disc for you. It brings back memories of everything I loved about this genre. You aren’t getting Motorhead here, but you are getting AOR/melodic rock done to perfection – kick back and enjoy.

Reviewed by Tania for Sleaze Roxx, May 2008.