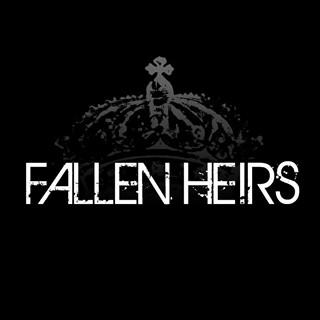 Review:
There are only three instances when I heard a band for the first time live and immediately went to buy whatever music they were selling after the set. The first was Diemonds over two years ago, and their The Bad Pack CD ended up being my favorite record of 2012. The second was Second Pass, who I saw play about a month and a half ago and resulted in me picking up their Fragments EP. The last is Fallen Heirs whom I recently had the pleasure of seeing when they opened a show for Last Bullet.

As soon as I heard Fallen Heirs play I knew that I liked their music. It is therefore no surprise that I really enjoy their Fallen Heirs EP. Funny enough, I did not even look to see how many tracks were on the album when I purchased it but soon realized that there were only four! I also thought that the disc was called the ‘Black EP’ based on what the band’s merchandise table indicated. Whatever the case, I really like the four songs represented and absolutely love portions of “Lead Us To Water”.

There are three main ingredients that make all these songs really good. First of all, frontman Tim Shaw‘s voice has the pitch and tone that I really enjoy — like a cross between L.A Guns‘ Phil Lewis and Jane’s Addiction‘s Perry Farrell. Secondly, the music played by guitarists Jay Sayne and Eddie Silver, bassist Phily Dee and drummer Jorge Pereira (who is no longer with the group) is riff oriented and melodic — yet has a modern edge to it. Thirdly, the EP has a nice ‘live’ raw feel to it and definitely was not over produced.

The Fallen Heirs EP starts off with “Take It Slow”, which does anything but. The song begins with a long scream from Shaw before kicking into a nice but short melodic guitar solo and some very cool verses highlighted by the gang vocals of “Yeeeahhh”. I like the entire song except the parts where Shaw whispers “Take It, Take It Slow” — aside from that, it rocks from start to finish. “Lead Us To Water” starts off a bit slow before launching into some very enjoyable verses with differing gang vocals, just like “Take It Slow”. The chorus is not particularly fast or catchy by any means, but highlights Shaw‘s voice and I really enjoy it — the guitar solos throughout are also a thing of beauty without overshadowing the song as a whole. When I first heard “Lead Us To Water” it instantly brought me back to when I saw Fallen Heirs perform live, as it is the one track that I remember pretty vividly from their set. “Beg It Bleed It” is another good tune from start to finish but without the gang vocals during the song’s verses. “Wake Up” kicks off with some drumming before launching into the fastest song on the EP, the guitar solos at the end are once again a thing of beauty — melodic yet fast and furious.

My only wish for the Fallen Heirs EP is that it contained more songs. My appetite for Fallen Heirs‘ material feels like it was just wetted and not satisfied. In any case, if the band can deliver a full-length CD with songs similar in quality to what they offer on this EP, we are all in for one massive treat musically speaking. Check this band out!