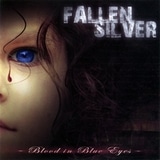 Review:
There must be something in the beer ‘down-under’, because Australia has an uncanny knack of producing great pub-rock bands. Following hot on the heels of popular Aussie bands like Rose Tattoo and The Angels are Sydney based Fallen Silver with their debut CD Blood In Blue Eyes.

Opening with the kick ass rocker “East L.A.”, you can just picture being in a hazy smoke filled bar (before everything went non-smoking that is), swigging back a JD or 10 and listening to a band such as Fallen Silver. The title track “Blood In Blue Eyes” starts off acoustically with singer Matt Chambers almost wailing, which has me thinking “uh-oh a ballad”, but once it gets going it builds up into something a lot better than I initially expected. Chambers‘ sometimes dreamy sounding vocals are really showcased on this one. He has the kind of voice that can get rocking but there is something soothing and sensual about it in parts as well.

“Sunsets” is bluesy rock drenched with some nice guitar work, but the cream of the crop for me here has to be the raunchy bass driven “Snake Eyes”. Maybe it’s just me, but this is one sexy sounding song. “Vamphyres” is the only tune I’m not too wild about. It’s a bit murky and drawn out so it loses my attention a bit, but even in saying that, it has a couple of cool moments musically. So many songs on Blood In Blue Eyes are atmospheric in that they have an air surrounding them of being sort of laid back yet insistent. If I was a pot smoker I’d probably feel like lighting up a joint!

Fallen Silver mention The Black Crowes as an influence and on some songs that influence is apparent, like the mellow “Porcelene” which again has that ‘cruisey’ feeling but it’s gutsy at the same time. They also remind me a bit like Backwash and I can hear traces of Finish band Wolfchild, but vocally not as gruff.

All in all Fallen Silver have delivered up some raw sounding, no-frills rock with a twist of originality. Blood In Blue Eyes may not be a hard head-banging album, but it is good rock nonetheless.