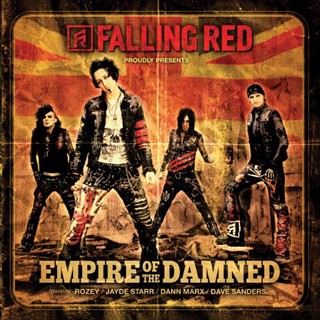 Review:
Empire Of The Damned is the second full-length album from UK hard rock band Falling Red. With UK tours and festival performances scheduled, the band has set their sights high with this rumbling release.

“Time To Rise” opens with a haunting spoken media news frenzy and a drawn out guitar solo rippling over the rhythm section. I’m not usually a fan of ‘introduction’ tracks, but at a minute and a half this one sets the tone perfectly. “The Devil You Know” gives guitarist Jayde Starr center stage, but I especially like the paired down production that gives each layer its appropriate limelight. However the chorus is a bit generic for a hard rock band and the riff quickly becomes repetitive. “We Escaped A Cult” is creepily atmospheric before bursting out with Starr‘s signature rough guitar sound. The song includes a great bouncy bass rhythm matched by anthemic vocals in the chorus, and the silence between the chorus and bridge is also particularly effective, illustrating Falling Red‘s attention to detail in their song-writing.

“Break Me” is a relentless, hell-bent track with Dave Sanders‘s wild drumming of particular note — although after the solo the song again lacks in creativity. “Outcast” has a more original riff pattern, especially with the echoes on the vocals, though the backing vocals could do with more weight and clarity — they often tend to sound clouded and sliding for the notes. “Disposable” sets Sanders loose on the drums (just check him out live) but unfortunately the rest of the track lacks the originality to keep you engaged and enamored. “Empire Of The Damned” sits uneasily in the middle of the album with its slow sung introductory vocals, but Rozey twists his voice beautifully to fit the tone of the song and overall it’s a worthy title track, if a little messy in places.

“We Are Reckless” kicks off fast from its slower predecessor, with Rozey‘s vocals quickly taking the lead, though it’s a fairly uneventful and mediocre effort. “We Are Sanctuary” makes you think a ballad might be on the way but these boys know better than to let you relax and keep you guessing with a catchy tune with great backing vocals — my favorite on the album. The closing two tracks, “Lonely Way To Die”, which lacks clear cut song-writing, and “Change For No One”, which is slightly too long and repetitive (especially in the introduction), round the album off distinctly.

Empire Of The Damned is darker and rougher than the ‘stadium rock’ Falling Red list in their biography, but by no means in a bad way.
Overall it is a genuinely good and creative album, although it could do with some polishing in terms of backing vocals, vocal tuning and catchier hooks. There are a couple of especially good tracks on Empire Of The Damned, with the rest worth a listen if you like hard rock with a touch of punk.