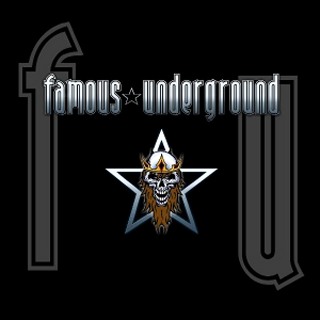 Review:
From the ashes of Revolver rises Famous Underground — the heavy metal project fronted by former Slik Toxik frontman Nick Walsh. Revolver burst onto the scene with their 2004 album Turbulence, and several years later Walsh and his long-time cohort Laurie-Anne Green put together this new band that possesses an even heavier sound. Fans of the ’80s hair metal that Slik Toxik delved into may be disappointed, but for people that liked the direction Sebastian Bach took on Angels Down will enjoy the self-titled disc.

Famous Underground storm out of the gates with “Wasteland”, a song that shows Nick Walsh still has the voice after all these years. It is a crunchy number that speeds along like the Beautiful Creatures on meth — and really that’s what this CD is all about, delivering elements of modern metal with a hint of old-school. The album’s first single “Dead Weight” (and a holdover from the Revolver album) contains some nice touches of melody, but the down-tuned chorus lets it down — however all is forgiven by the time “Forever And A Day” comes around, a mid-tempo rocker that is a borderline ballad and has a chorus that actually works! “On Broken Wings” is as close as Famous Underground come to the ’80s sound with another middle-of-the-road rocker that succeeds with its melodies.

Sometimes this disc treads too far into the ‘modern’ realm for my liking, and when they do the results are varied. “Bullet Train” and “Wheel Of Misfortune” are both fairly forgettable, but on the other hand “Mommy Is A Junkie” and “Hell To Pay” take the same approach and make it work.

I’ll be honest, Famous Underground is going to be a stretch for those of us stuck in the ’80s — but the people who like the new metal sounds coming out today (I’m not talking that nu-metal crap though), enjoyed Revolver‘s debut, and wish Sixx A.M.‘s latest release rocked a bit harder, should find lots to like on this CD. I still like Nick Walsh‘s voice, but I’m more partial to the sounds of Slik Toxik than the heavy metal of Famous Underground — however this isn’t about reliving the past, these guys (and one girl) are looking towards the future.