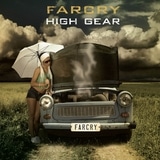 Review:
Melodic rock fans rejoice, Farcry‘s debut album has finally arrived. Anyone that enjoys the slick production and captivating harmonies of bands such as Harem Scarem and Danger Danger will salivate over this American band’s CD.

Fans of this musical genre will know exactly what to expect, and Farcry deliver what one envisions. Every musical note seems meticulously placed and played to perfection, while every chorus is memorable and larger than life. Each member pulls their weight equally, but I’ll have to give some extra credit to guitarist Pete Fry (who also plays in RocKarma) who really shines on High Gear – plus he comes across as one of rock’s true ‘nice guys’.

The stand out track to my ears is the Jason Pawlak penned “Fine Line”, a moody song about heartbreak that slowly builds itself up before climaxing during the chorus – it really is a stunning track. Of course all the typical melodic rock elements are found here, from up-tempo rockers like “Love Won’t Wait” and the Tyketto influenced “Out Of Reach” to the mandatory ballads such as “Heaven” and “Same Mistake”.

There are a few unexpected twists on High Gear though. “Have It All” for instance is heavier than the usual melodic rock fare as is the cover of Jim Steinman‘s “Nowhere Fast”, which has an incredible bottom-end and kicks the shit out of Meat Loaf‘s version. “She’s Crazy” also mixes things up with its dreamy Enuff Z’nuff delivery.

Farcry hasn’t reinvented the wheel with High Gear, then again, albums like this rarely do. Sure the band may be guilty of reliving 1989 and recycling a sound that was popular some twenty years ago, but there is no shame in that when it is done this well. People often over analyze music and in the process forget how fun it is supposed to be – Farcry haven’t forgotten this simple concept.