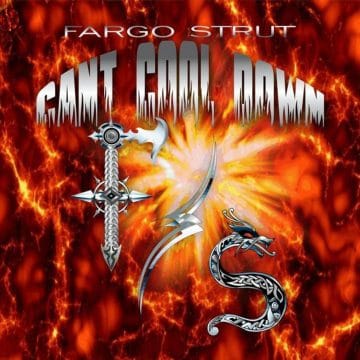 Review:
Nashville’s Fargo Strut have recently released their second album, Can’t Cool Down. I’ve been following these guys since reviewing their 2016 self-titled debut.  They are a band I like, not as much for their recordings, but for what I can picture to be their live performances. In fact, I described their first album by saying, “This band is tight, no doubt about that. My guess is they blow away the live crowds, and I’d get a ticket in a second. Sure, the album production suffers. But I’m thinking about early American Dog; how they stuck to a formula and revelled in it. That’s not a bad thing…. Fargo Strut have some pretty good potential, and I’m personally looking forward to whatever they come up with next.”

Well, Can’t Cool Down has overcome the production issues of the previous album, by improving the quality of instruments and maturing during mixing, particularly the EQ levels and amp tones. I still feel the drums could benefit from a bit more reverb and or punching up within the mix. However, I did lose my high quality headphones recently, so maybe I’m not getting the best sound out of my $40 Koss earmuffs. I’ll give Fargo Strut the benefit of the doubt on this one.

The guitar work is really good overall. “After The Storm” features a neat breakdown showing how tight the band is. The title track “Can’t Cool Down” expands on the abilities of Billy Atkisson / Jeffery Turner with both rhythm and lead duties. Not sure who does what, but nicely done. In fact, Billy mentioned to me that “Can’t Cool Down” is the band’s favourite song to play live. They often close their set with it, mixing in the final riffs by Iron Maiden’s “The Trooper” as a crowd pleaser.

I actually hear some early ’80s power metal influences in the opening to “Down To The River.” There’s a decent use of effects there. “Eastbound And Down” is a fun up-tempo track that shows Fargo Strut can enjoy themselves and display some creativity.  The song was originally written by Jerry Reed for the soundtrack of the 1977 movie Smoky And The Bandit. I think this hard rock cover works. There are some interesting performances on “Knock On My Door”, both vocally and with the guitar lines.  Guitarist Jeremy Asbrock (Gene Simmons Band and Ace Frehley Band) played much of the solo work on this track, which is a real highlight that the band is proud of. A feather in the cap of Fargo Strut for having someone of that calibre joining them.

I’m quite happy to listen to “My Own Thing”, which has a freewheeling late ’80s vibe, with a tinge of L.A. Guns. A darker offering in “Running After You”, and “Shoot Me Down” is heavy on the double bass. I haven’t made up my mind whether it’s appropriate for the song, but I’ll go with it.

Overall, I like what Fargo Strut has to offer with Can’t Cool Down. They will not be the “next big thing” but there is a fun aura to them… As I said, I’d love to see them perform live. I’m happy to add this album to my 2020 mix, with a sense of trying to support hard working bands in these trying times. Give it a listen and find out for yourself. Thanks to Billy Atkisson for answering questions and putting up with me. Can’t Cool Down can currently be sampled on hearnow.com and should hit Amazon.com and Spotify sometime next week. To purchase a hard copy, visit the band’s Facebook page and send a personal message to Billy and the boys.