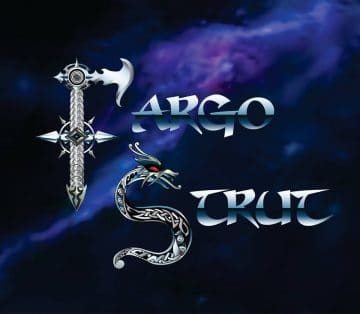 I do have to say this straight away, and unfortunately the band won’t like it. I am not a fan of the album’s production quality. As good as the songs are, the sound comes off flat. Almost like someone applied far too much compression or something. Nothing snaps that really should…. vocals, guitar licks, cymbal splashes. My recent talks with multi-tasking vocalist/guitarist/drummer Billy Atkisson reveal that Fargo Strut are writing a new album now, with an expected early 2018 release.

About the album itself, let’s logically start with the newest single “New Day Rising.” A grungy, aggressive track, it offers solid modern-ish guitar work and a reliable back end. Frankly, as a long time drummer, I know how hard it is to play and sing at the same time. The rhythms are different between each talent, and I was never good enough to catch on like Phil Collins or Levon Helm. “Everytime You Touch Me” offers more solid rock, and I could say the same for much of Fargo Strut’s initial offering. I’m really liking the guitar interplay in “Across the Sky” which has a powerful opening line, coupled with a well thought out solo that is not over the top or too much for the song. “Must Be Dreaming” has a guitar line in the vein of Ozzy era Zakk Wylde. I’m comparing it to intermediate level “Don’t Want To Change The World” style.

This band is tight, no doubt about that. My guess is they blow away the live crowds, and I’d get a ticket in a second. Sure, the album production suffers. But I’m thinking about early American Dog; how they stuck to a formula and reveled in it. That’s not a bad thing. After ten or more years, I’m still listing to The Dog. Fargo Strut have some pretty good potential, and I’m personally looking forward to whatever they come up with next.

Other than the two videos posted on YouTube (see below), there’s no current way to sample the entire album. Billy Atkisson tells me they are working on a deal with CD Baby and iTunes that could be secured soon. The best way to contact the band is via  its Facebook page.

Fargo Strut – Every Time You Touch Me (Official Video)