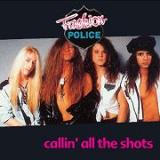 Review:
The times they were a-changin’ in 1992, which surely affected the future of many hair/rock/glam bands that were trying to become or remain a part of the scene. Unfortunately, that scene was fading from existence. Fashion Police are a prime example of a band caught in this phenomenon. Their sound is pure late 80’s, and if the album Callin’ All The Shots had been released during that time perhaps this Cleveland quartet would have had a better chance at being signed by a major label.

It is evident that Fashion Police were heavily influenced by early Poison. The songs are catchy, fast-paced, and sprinkled with dizzying guitar riffs akin to C.C. DeVille, particularly on “Crazy Stuff”, “Days And Nights” and the “Talk Dirty To Me” clone “Baby Loves To Rock”. Singer Daniel Montesanto fares well against his more well-known peers, belting out lyrics that run the gamut of typical tongue-in-cheek sex, drugs and rock n’ roll topics that include references to riding the rocket and making it to the top. They also show a softer side with the ‘boy loves girl’ tunes “Alone/Together”, “Days And Nights” and “Feels So Good”.

Most of us have a hard time admitting that we actually enjoyed listening to this type of candy-coated music back in the day. But there’s enough distance between then and now to allow ourselves some guilt-free indulgence with Callin’ All The Shots. Give it a few listens and you’ll soon be rummaging through your closet for your vintage hair band t-shirts. Whether you try them on for old time’s sake or immediately put them up for sale on eBay is up to you.